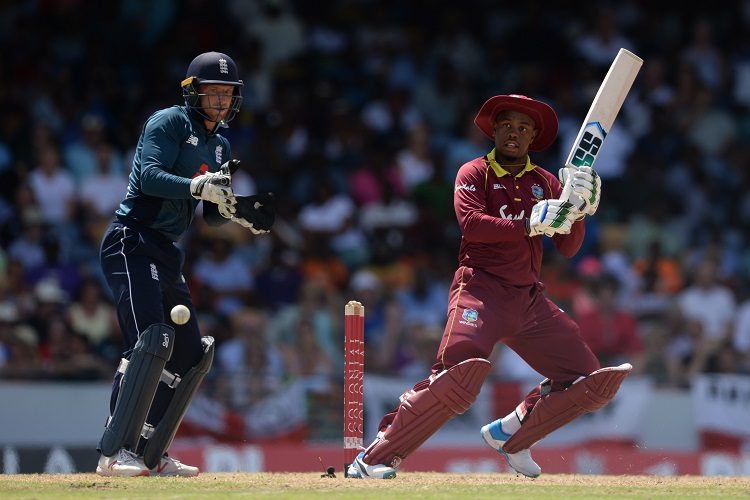 BRIDGETOWN, BARBADOS - FEBRUARY 22 : Shimron Hetmyer hits out during the second one-day international between the West Indies and England at Kensington Oval on February 22, 2019 in Bridgetown, Barbados. (Photo by Philip Brown/Popperfoto)

With the series level 1-1, West Indies will take on top-ranked England in the third ODI of the five-match series, at National Cricket Stadium, St George's, Grenada, on February 25, 2019.

West Indies had a remarkable turnaround in the second ODI, at the same venue. Shimron Hetmyer smashed 104 not out off 83 balls to take them to 289/6 before England collapsed against to 263 against Sheldon Cottrell (5/46).

Since the 2015 World Cup, England have scored at 6.23 an over. To put things into perspective, no other side has topped even 5.71. Even while chasing their run rate reads 6.21. That is precisely what West Indies are up against.

West Indies' win in the last match came after 6 consecutive defeats against England. England have won 50 ODIs and lost 43 against West Indies, which gave them a win-loss ratio of 1.16. However, West Indies hold a 22-16 advantage at home.

This is one of those low-scoring tracks where 250 can be a decisive score. The average run rate here is only 4.92 (in other words, 241 is the average score), while the side batting first holds a slight advantage (4.98 to 4.84).

Only thrice have sides crossed the 300-mark here, of which two date back to the 2007 World Cup and the third came against Zimbabwe, in 2013. Only four hundreds have been scored here this decade, three of them against Zimbabwe. Darren Bravo (260 runs at 130) holds a particularly good record here.

Shimron Hetmyer (West Indies): Chris Gayle might have followed his hundred with a fifty and hit 16 sixes in the series already, but the batting performance of the series has come from Hetmyer. Only 22, Hetmyer has already smashed 4 hundreds in 22 ODIs, and his average (42) and strike rate (109) are indicative of his immense talent.

Jason Roy (England): Roy failed in the second ODI - but then, that has been the story of his career. Of his 19 fifty-plus ODI scores he has scored at over a run a ball 16 times. One of these came in the first ODI of the series, where he set up a chase of 361 with an 85-ball 123.

Prediction
Despite West Indies's win in the second ODI, England will take field as favourites - mostly because of their incredible depth in batting.