South Africa bow out from World Cup despite England victory

South Africa bow out from World Cup despite England victory 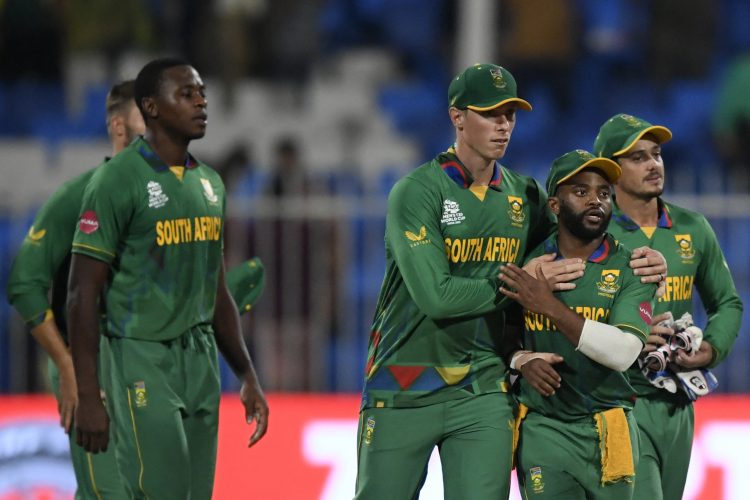 Another World Cup campaign ends in heartbreak for South Africa as the Proteas are knocked out at the Super 12 stage on net run rate despite beating England by 10 runs in Sharjah. Temba Bavuma’s side has overcome plenty of adversity to win four of their five games in the tournament, but South Africa were unable to restrict England to the 131-run total needed to progress to the semi-finals.

Rassie van der Dussen set things up brilliantly with his 94 off 60 balls that took South Africa to 189 for 2, and the Proteas eventually ended England’s unbeaten streak in the competition as Kagiso Rabada wrapped up the win with a hattrick in the final over of the match.

Australia’s convincing victory over West Indies earlier in the day meant that South Africa would need an emphatic victory over Eoin Morgan’s side to qualify for the semi-finals. Although Moeen Ali dented those hopes with the early wicket of Reeza Hendricks, Quinton de Kock and Rassie van der Dussen did well to get the Proteas off to a good start at 40 for 1 in the powerplay.

De Kock attacked Moeen Ali using the reverse sweep while van der Dussen charged down the track against Chris Woakes to produce two boundaries in the 6th over. Van Der Dussen and de Kock shared an important 71-run partnership, but the Proteas entered a different gear following Aiden Markram’s arrival to the crease. Markram blazed his way to an unbeaten 52 off 25 deliveries and helped South Africa smash 71 runs off the final five overs alongside van der Dussen.

The pair clobbered three sixes off Chris Woakes’ final over to start the carnage and punished the English death bowlers who struggled in the absence of the injured Tymal Mills. Van der Dussen carted five 4s and six 6s in his innings of 94* that took South Africa to an impressive first innings total.

The English openers came out the blocks firing in the run chase but suffered a body blow when Jason Roy pulled up injured while running a single and was forced to retire hurt with a possible calf strain. South Africa made further inroads with the wickets of Buttler and Bairstow in consecutive overs, but a half-century partnership from Moeen Ali and Dawid Malan effectively ended the Proteas World Cup hopes.

Liam Livingstone took England past the decisive 131-run mark while hitting three consecutive sixes off Kagiso Rabada, who conceded 45 runs in his opening three overs of the innings. However, Rabada returned to have the last laugh, dismissing Chris Woakes, Eoin Morgan and Chris Jordan in three balls while defending 14 off the final over to give South Africa a deserved 10-run victory.