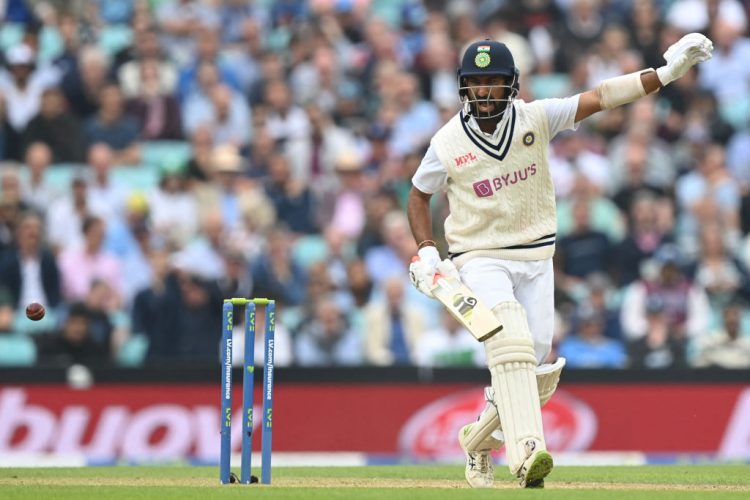 The crowd at the Oval were treated to a batting masterclass on day three as Rohit Sharma scored his first away Test century to put India into the ascendency in the fourth Test against England. The Indian opener made a majestic 127 filled with elegant drives and immense control to help India finish the day on 270 for 3 with a 171-run lead in the second innings. Rohit was provided good company by Cheteshwar Pujara (61) and KL Rahul (46) as the Indian batters frustrated the English seamers on the flattest pitch of the series that offered very little sideways movement.

India began the day at 43/0, and with the lights on and the cloud hanging low in the opening hour, Chris Woakes and Jimmy Anderson provided a tough examination for the openers with their metronomic line and length. Rahul and Rohit did well to see off this initial burst, but the Lord’s centurion eventually fell four runs short of his half-century after a peach of a delivery from James Anderson that caught the outside edge.

The pitch eventually flattened out in the afternoon session, and Pujara and Rohit made the most of the excellent batting conditions as they put on an excellent 153-run partnership to consolidate India’s position. Uncharacteristically, Pujara got off to a flying start of 30 runs from 40 balls as he continued to pepper boundaries between backward point and third man. Rohit, at the other end, looked in supreme control as he played a couple of sweeps off Moeen Ali before pulling Anderson to enter the 90’s.

The Hitman eventually flexed his muscles to reach three figures with a lofted six off Moeen Ali over long-on. India put on 91 runs for the loss of no wickets between Lunch and Tea before scoring some pressure-free runs against the spinners before the new ball arrived.

England lacked any threat for the majority of the day on the flat Lord’s pitch, but the new ball did the trick for the hosts as Ollie Robinson removed both set batters off the very first over with the new cherry. The elegant innings from Rohit Sharma ended in the most disappointing fashion imaginable with the Indian opener top-edging a half-tracker straight into the hands of Chris Woakes at deep fine leg before Pujara inside-edged a nip-backer that ballooned towards Moeen Ali at second slip.

England and the crowd were fired up after this crucial double blow, but Virat Kohli and Ravindra Jadeja did well to stabilise the Indian innings during this tricky period against the hard new Dukes ball. Kohli left the ball impeccably during his brief spell at the crease and played some crisp cover drives off James Anderson before bad light eventually called curtains on an excellent day’s play for India. The tourists finished on 270 for three, with a 171-run lead heading into the final two days of this match.