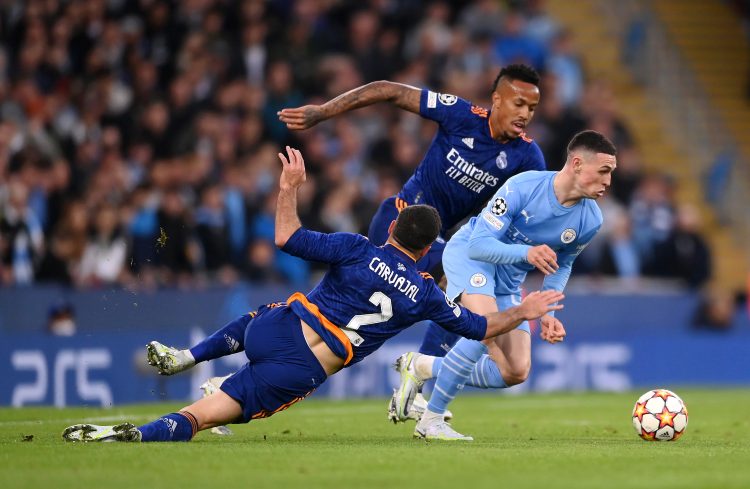 Manchester City and Real Madrid served up a breath-taking spectacle in the first leg of the Champions League semi-final at the Etihad which saw Pep Guardiola’s side take a dramatic 4-3 victory over Los Blancos. City dominated the proceedings for the majority of the 90 minutes, opening the scoring after just 94 seconds and taking a two-goal cushion on three separate occasions on the night. However, a stunning Karim Benzema brace and an unstoppable solo goal from Vinicius Jr. kept Real Madrid in the contest and ensured that the Cityzens have just a one-goal advantage heading into the second leg.

Playing in their second UCL semi-final in a row, Manchester City came out the blocks firing and scored the fastest goal in a Champions League semi-final. Riyad Mahrez cut inside into acres of space from the right-wing before picking out Kevin de Bruyne in the box, who slotted his diving header past countryman Thibaut Courtois to make it 1-0 within two minutes. Due to some more calamitous defending from the visitors, the home side doubled their lead just eight minutes later as Gabriel Jesus capitalized on David Alaba’s mistake in the box to score his fifth goal in four days.

City should have added to that advantage in the opening half-hour, but Riyad Mahrez missed a guilt-edged chance from close distance – much to the dismay of Pep Guardiola on the sidelines – before Phil Foden’s stinging shot narrowly evaded the far post on a counter-attack. The hosts were eventually made to pay for their profligacy as Karim Benzema pulled one back for the visitors with his first sight on goal, volleying a Ferland Mendy cross in off the post to give Madrid a lifeline before the break.

Carlo Ancelotti brought off the struggling David Alaba for Nacho Fernandez at half-time, but Madrid’s defensive issues persisted in the second period as Phil Foden restored City’s two-goal advantage with a header from close range. However, Madrid hit back in equal measure just two minutes later, with the speedy Vinicius Jr. bursting past make-shift right-back Fernandinho at the halfway line before calmly finishing past Ederson to make it 3-2.

Despite the manic nature of the contest, City continued to push forward after Vinicius’ strike and were rewarded when Bernardo Silva fired the ball into the top corner after some of the Madrid players had stopped for a foul on Oleksandr Zinchenko on the edge of the box. However, there was one final twist in the tale remaining as Aymeric Laporte handled the ball to concede a penalty, which was cleverly chipped down the middle by Karim Benzema to keep Real Madrid alive in the tie ahead of the return leg in Spain.