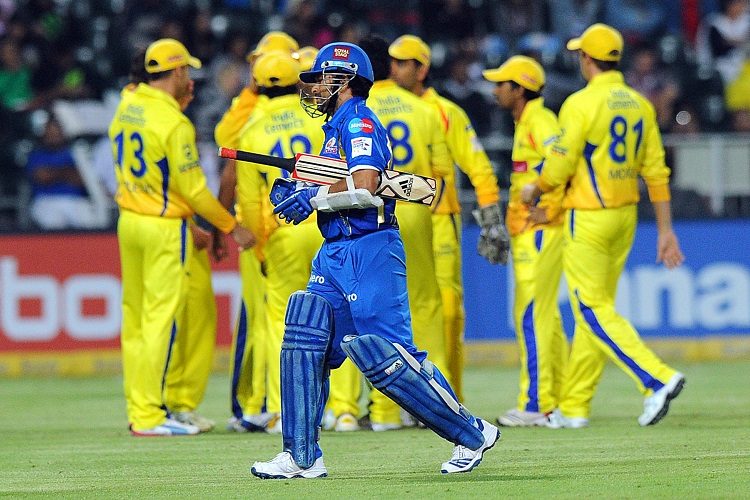 With a win-loss ratio of 1.607, Chennai are the best team in IPL history © Alexander Joe / AFP / Getty Images

0 team change for Virat Kohli for 12 seasons now. He is the only one to feature for the same franchise – Royal Challengers Bangalore – for this long.

2 teams have changed their name since inception and the Delhi franchise is the second. The erstwhile Delhi Daredevils will play as Delhi Capitals this time. The other instance is of the now-defunct Rising Pune Supergiants, who removed the “s” at the end in their second season, in 2017.

3 hat-tricks for Amit Mishra, the most. Yuvraj Singh has 2, while 12 others have one apiece.

6 teams have won the IPL till date – CSK, MI (thrice each), Kolkata Knight Riders (twice), Rajasthan Royals, the now-defunct Deccan Chargers, and SRH (once each).

6/14 best figures in IPL history, by Sohail Tanvir for RR against CSK at Jaipur in 2008. At that point these were the best T20 figures. Adam Zampa (6/19) is the only other one to take 6 wickets in an innings.

13 ducks for Harbhajan Singh, the most. Rohit Sharma, Gautam Gambhir, Manish Pandey, Parthiv Patel, and Piyush Chawla have 12 each.

95 catches for Suresh Raina, the most for a non-wicketkeeper by some distance. Rohit (79) is next, followed by de Villiers (78).

97 matches for S Ravi as umpire, the most. Ravi and Kumar Dharmasena (94) are the only ones to stand in 70 or more matches.

124 dismissals for Karthik, the most by a wicketkeeper. MS Dhoni (116) is the only other one in three figures.

159 matches as captain for Dhoni, significantly more than Gautam Gambhir (129). Nobody else has led his side even 100 times.

175* highest IPL individual score, by Chris Gayle for RCB against Pune Warriors India in 2013. This is also the best score in all T20 cricket. Brendon McCullum (158* in the first ever IPL match, then a world record) is the only other one to score over 150.

291 sixes for Gayle, the most by a considerable margin. De Villiers is next, with 187.

973 runs by Kohli in 2016, the most by any batsman in a single season. Despite occupying the 2nd spot with 848, David Warner did not win the Orange Cap, as he got the runs in the same year.