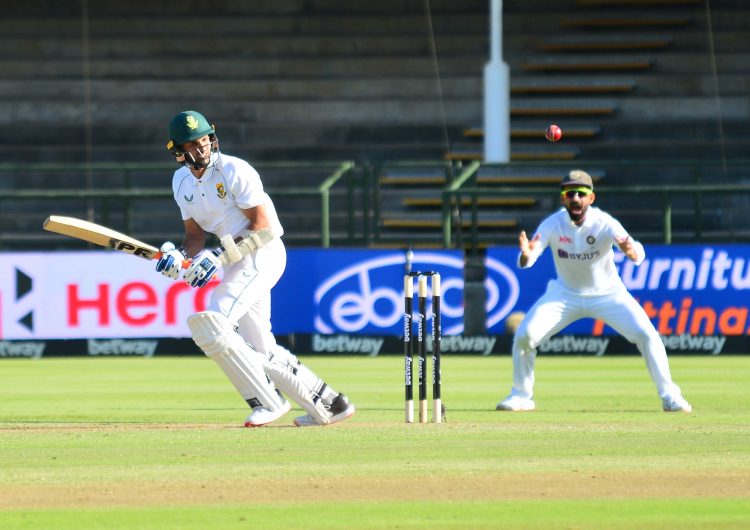 It was another topsy-turvy day of Test match cricket in the third Test at Cape Town, with both sides trading blows to set up a potential grandstand finish in the series decider. Four years on from his debut in Newlands, Jasprit Bumrah returned to pick up his seventh five-wicket haul in Tests as India bundled out South Africa for 210, taking a first-innings lead of 13. That lead was extended to 70 by the end of the day’s play with Virat Kohli and Cheteshwar Pujara seeing the Men in Blue through to stumps after both openers departed early on.

India were right on the money from ball one on day two, with Jasprit Bumrah knocking over Aiden Markram off the second delivery of the morning, getting one to jag back sharply to knock over the South African opener’s exposed off-stump. The Proteas also lost the nightwatchman – Keshav Maharaj – on 25, but Rassie van der Dussen and Keegan Petersen combined to steady the ship before Lunch, adding 67 pivotal runs as they frustrated the Indian bowling attack.

Fresh off his maiden half-century at the Wanderers, Keegan Petersen played with caution at the start of his knock, scoring only six runs off his first 43 deliveries before slowly shifting through the gears as India momentarily lost their discipline with the ball.

Petersen took South Africa past 100 alongside Van der Dussen and stitched another important stand with Temba Bavuma to slowly take the hosts into the ascendency. However, just as the deficit approached 60, India landed a counter-punch with Mohammad Shami nicking off Temba Bavuma and Kyle Verreynne in the space of three deliveries. Jasprit Bumrah inflicted further damage upon the hosts before Tea, terrorizing Marco Jansen with a hostile spell of fast-bowling before bursting through the defences of the all-rounder with one that held its line and crashed into the off-stump.

South Africa’s hopes of a first-innings lead were dashed when Jasprit Bumrah dismissed Keegan Petersen after the break on 72 before rounding up the South African innings and sealing his five-for with the wicket of Lungi Ngidi.

Taking a lead of 13 into the second-innings, India suffered another early setback with the bat as they lost both openers inside the first six overs. Mayank Agarwal overturned an early lbw call from Kagiso Rabada but didn’t last too long afterwards, edging to first slip on seven. Six balls later, KL Rahul followed his opening partner back to the pavilion as Marco Jansen drew the Indian vice-captain into a drive, handing Aiden Markram a regulation catch in the slips.

The experienced duo of Cheteshwar Pujara and Virat Kohli once again weathered the storm against the new ball, adding 33 runs in 11 overs before the close of play to give India a 70-run lead.