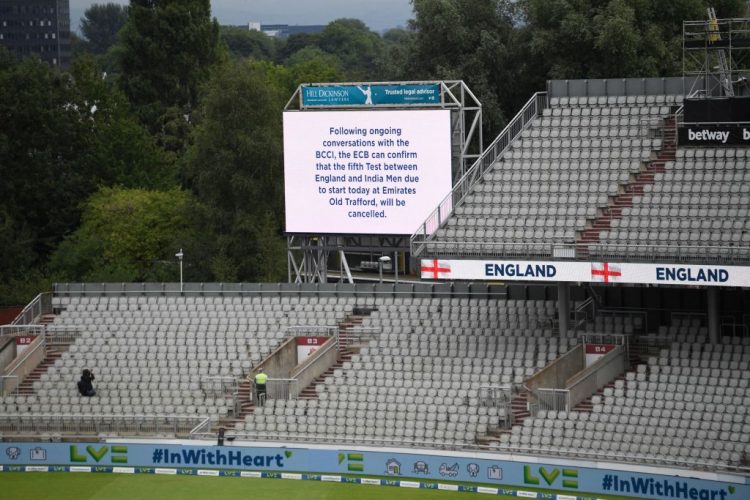 The fifth and final Test between England and India at Old Trafford in Manchester has been cancelled hours before the scheduled start of play due to a Covid-19 outbreak within the Indian squad.

The ECB released a statement on their website reading, “Due to fears of a further increase in the number of COVID cases inside the camp, India are regrettably unable to field a team. We send our sincere apologies to fans and partners for this news, which we know will cause immense disappointment and inconvenience to many.”

The ECB originally announced that India would forfeit the Test after being unable to field an XI, but that statement was quickly amended, with the BCCI subsequently announcing their plans on rescheduling this final Test.

“The BCCI and ECB held several rounds of discussion to find a way to play the Test Match, however, the outbreak of Covid-19 in the Indian team contingent forced the decision of calling off the Old Trafford Test Match.

“In lieu of the strong relationship between BCCI and ECB, the BCCI has offered to ECB a rescheduling of the cancelled Test match. Both the Boards will work towards finding a window to reschedule this Test match,” read the statement from the BCCI.

The Covid scare originated after head coach Ravi Shastri and three other members of the Indian support staff – Bharat Arun, Nitin Patel and R Sridhar – tested positive during the fourth Test of the series at the Oval and were forced to isolate from the rest of the squad. However, the fears from the Indian camp escalated after India’s assistant physiotherapist – Yogesh Parmar – tested positive in the lead up to the Old Trafford Test which caused the cancellation of India’s final practise session on Thursday.

The entirety of the Indian playing squad tested negative in the latest round of testing on Thursday, but there were concerns expressed by a few of the players on proceeding with the Test match after coming in close contact with the physio Yogesh Parmar over the past week. The Indian players have also undergone a second round of RT-PCR tests, the results of which are still awaited.

There were also health concerns for some players travelling with families, along with the added complication of the Indian Premier League that begins on the 19th of September in 9 days.

India currently lead the series 2-1 and have received 26 World Test Championship Points from the series, while England have pocketed 14 WTC points.