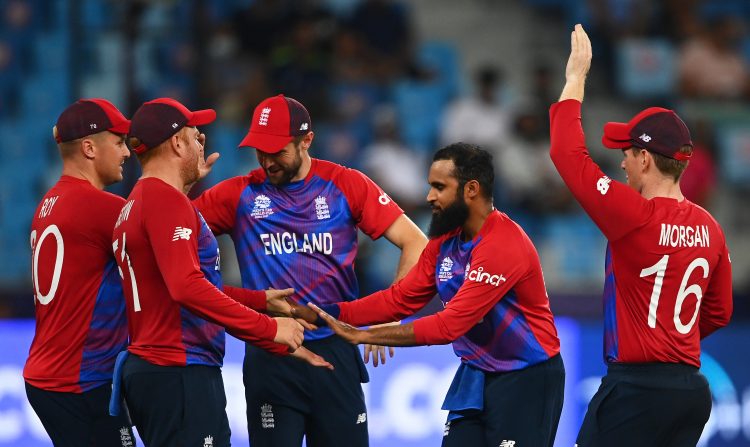 England got off to the perfect start to their 2021 T20 World Cup campaign as Eoin Morgan’s side brushed aside the defending champions with authority in their opening fixture in Dubai. It was a day to forget for the West Indies as the English bowlers decimated their destructive batting line-up to dismiss the Men in Maroon for just 55 runs – the lowest score by a full member nation in T20 World Cup history. The spinners Moeen Ali and Adil Rashid combined for six wickets from their 6.2 overs, while Tymal Mills bowled with venom and accuracy on his return to the side to help England register their first win over the West Indies at a T20 World Cup.

After opting to bowl first, the carnage started for the West Indies in the second over as Evin Lewis miscued a slog off a slower ball from Chris Woakes. At the other end, Eoin Morgan utilised Moeen Ali for four overs on the trot to combat West Indies’ left-hand heavy top order, and the off-spinner struck in his second over with the wicket of Lendl Simmons, who holed out to deep mid-wicket. Moeen followed that up by removing Shimron Hetmyer, and the all-rounder built up the pressure excellently with 18 dot balls in his four-over spell.

Chris Gayle was the only West Indian batter to reach double figures, but Tymal Mills removed the Universe Boss with a well-directed short delivery to reduce the West Indies to 31 for four at the end of the first six. However, things went from bad to worse after the powerplay as Mills drew the edge from Nicholas Pooran while Dwayne Bravo cut Chris Jordan straight to the hands of point before Adil Rashid cleaned up the tail emphatically.

Rashid uprooted the dangerous Andre Russell off the first ball of his spell with a wrong un’ that spun through the gate before dismissing Kieron Pollard and Obed McCoy off consecutive deliveries in his next over. The leg-spinner rounded up the innings with the wicket of Ravi Rampaul and finished with extraordinary figures off four wickets for two runs from his 2.2 overs as West Indies were restricted to their second-lowest score in T20Is.

Despite losing four wickets in their innings, it was a straightforward chase off 56 for England as Jos Buttler (24 off 22) guided the team home with 70 balls to spare to give Eoin Morgan’s side a massive Net Run Rate boost and a flawless start to their tournament in the UAE.