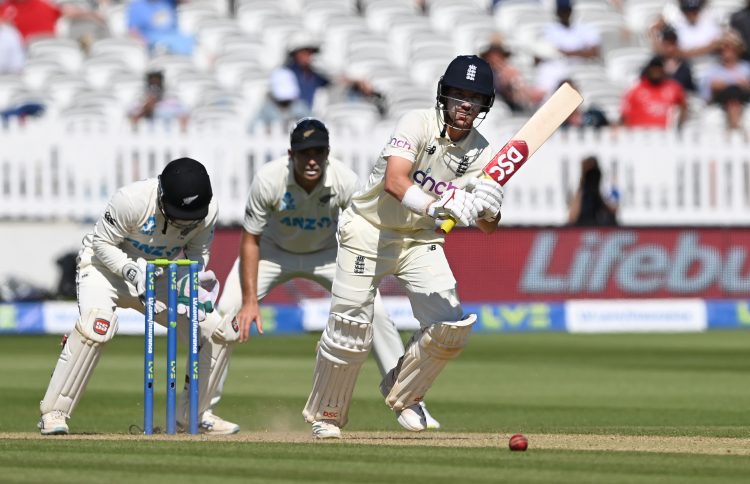 After the rain ensured not a single ball was bowled on Day three, New Zealand continued to dominate the first test match on the penultimate day. Rory Burns batted throughout the innings and scored a brilliant 132 for England but the day belonged to the veteran seamer Tim Southee who picked up six wickets which restricted England to a first-innings total of 275 and provided the Kiwis with a 103-run lead.

England resumed the day at 111/2 but were handed a body blow on the very first ball of the morning as Kyle Jamieson nicked off the England captain Joe Root.

The dismissal of Root prompted a mini-collapse for the hosts on the fourth morning with Southee in particular, running through the English middle order. After taking a more off-stump guard following his troubles with the ball moving away, Ollie Pope, unfortunately, was trapped on his pads by the ball that swung in. Daniel Lawrence failed to build on his promise from earlier in the year and nicked off to third slip before James Bracey’s debut innings lasted only 6 balls after a wonderful in-swinger from Southee rattled his stumps.

The one England debutant who did have a promising start – at least on the pitch – was all-rounder Ollie Robinson who stuck at the crease alongside Burns and put together a well compiled 42 following the middle-order collapse.

Amidst all the carnage at the other end, Rory Burns continued to be a thorn in the side of the Kiwis and reached his third Test century following a 52-run stand with number 11 James Anderson. Following his gritty innings, Burns was finally dismissed by Tim Southee who claimed a six-wicket haul for the second time at the mecca of cricket to give the Black Caps a glimmer of hope for victory on Day 5.

New Zealand looked in no hurry as they only managed 62 runs in 30 overs on day four with the loss of two wickets. Conway took his test tally to 223 – the most by an opener on debut – before finally being dismissed by Ollie Robinson. The Sussex pacer continued to impress on his debut and ended the day with the all-important wicket of Kane Williamson.

With only one day left in the Test match, the onus will be on New Zealand to force a result with some aggressive batting on the 5th morning. Nevertheless, despite a draw being the most likely outcome, the Kiwis will be buoyed by their performance in these conditions as they gear towards the ICC World Test Championship Final against India.