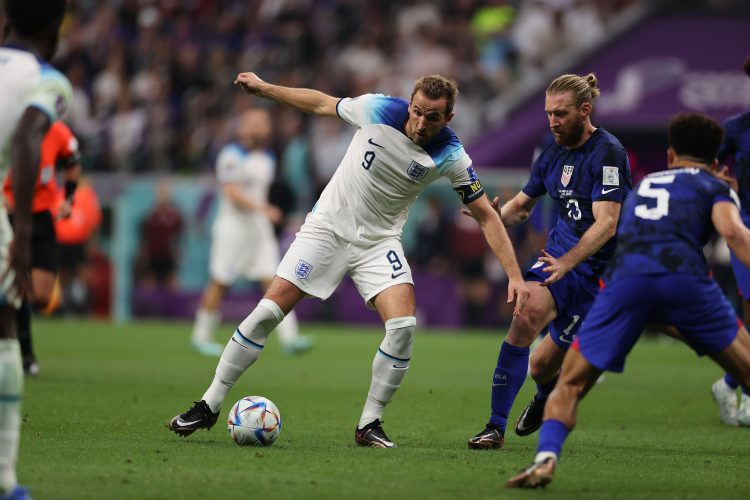 The spoils were shared on Thanksgiving night at the Al Bayt Stadium in Qatar as the United States held England to a 0-0 draw in their Group B encounter at the 2022 FIFA World Cup. Both sides managed just a combined four shots on target across the 90 minutes as the two defences remained resolute. Christian Pulisic came closest to finding the net for either side, the American hitting the bar in the first half, with Gregg Berhalter’s side earning a deserved draw to remain unbeaten against England at the World Cup finals.

England were unchanged from their ruthless 6-2 win over Iran from their opener, but the Three Lions struggled to match the USA’s intensity from the first whistle and failed to impose their authority on the fixture. Jude Bellingham and Bukayo Saka combined excellently to set up Harry Kane in the opening ten minutes, whose effort was blocked by centre-back Zimmerman. But barring that chance, England created very little.

The USA, on the other hand, pressed with relentless energy and showed tremendous intensity with and without the ball. Weston McKennie fluffed his lines after getting on the end of a delightful Timothy Weah cross in the 26th minute before Christian Pulisic created the best chance of the game seven minutes later. The Chelsea forward rattled Jordan Pickford’s crossbar with a stunning strike from the edge of the area.

England’s best period in the game came in the final few moments before half-time. Bukayo Saka should have done better from Luke Shaw’s cut-back before Matt Turner was forced into a watchful low save to deny Mason Mount.

The sluggish nature of the tie continued in the second period, with neither side managing to create any threatening opportunities to test the goalkeepers. England improved after a raft of substitutions from Gareth Southgate, with Jack Grealish, Jordan Henderson and Marcus Rashford bringing more control in midfield and attacking impetus. Grealish won a free-kick in injury time, but Harry Kane headed wide from the Luke Shaw set-piece as both sides had to settle for a stalemate and a point apiece in Qatar.

England remain at the top of Group B with this result but failed to seal their automatic qualification to the next round ahead of their final game against Wales. The Three Lions can secure the top spot in the group with a victory over their neighbours on Tuesday, while the USA also have their qualification fate in their own hands, with a win against Iran in their final group fixture in Doha enough to guarantee a spot in the last 16.