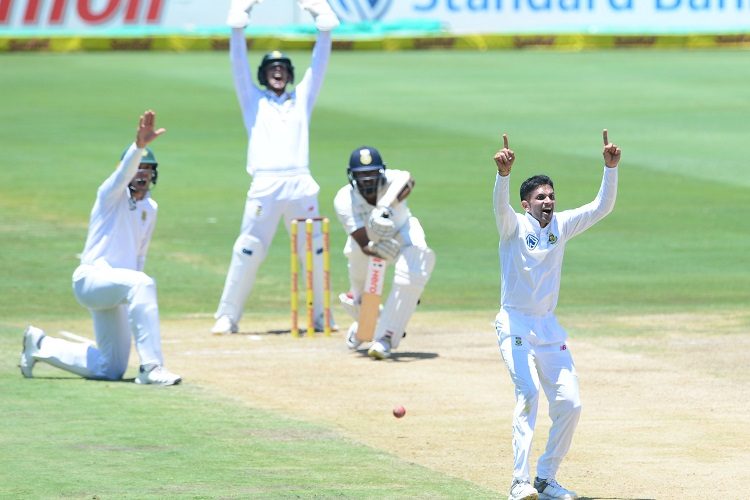 After a hard-fought day's cricket, England finished Day 1 at Newlands on 262/9. Ollie Pope (56*) is out there, having scored the only fifty of the innings. Holding the fort alongside Pope is James Anderson (3*). The pair has already put on 28 in 7 overs; another half an hour's batting will take them close to 300.

Pope played some delightful strokes that bordered on the outrageous once England lost their ninth wicket. He thrived on the uppercut, a shot he plays very fine, almost over the wicketkeeper – to the extent that South Africa were forced to deploy a long-stop.

There are no demons in the pitch, and the England batsmen have only themselves to blame for squandering away one start after another: six batsmen went past 25 but only two – Ben Stokes (47) and Pope – went past forty. If they see off the early spell of James Anderson and Stuart Broad, South Africa, despite their inexperienced batting line-up, should look for a sizeable lead.

Playing his last Test on his home ground, Vernon Philander (2/46) had Zak Crawley caught behind (4) with a trademark outswinger early in the day. Dom Sibley (34) and Joe Denly (38) added 55 before Kagiso Rabada (2/63) had the former caught behind.

Anrich Nortje (2/54) then bounced out Root (35), the ball brushing the latter's glove, while Keshav Maharaj (1/68) bowled Denly through the gate.

Stokes then launched a counterattack, as did Jos Buttler (27). However, once they fell, the onus fell on Pope to shepherd the tail once England lost 4 for 13 in half an hour's cricket.

Pieter Malan (South Africa): The uncapped Malan came into the side on the back of consecutive hundreds, against Border and Northern Cape, in his last 2 First-Class matches. That he has got the nod over Temba Bavuma has probably turned this into an acid test for him.

James Anderson (England): While the Newlands pitch has remained firm throughout the day, the South African seamers – especially Philander – managed to move the new ball around. Who better than Anderson to exploit these conditions?