Rashford double sends England into Round of 16

Rashford double sends England into Round of 16 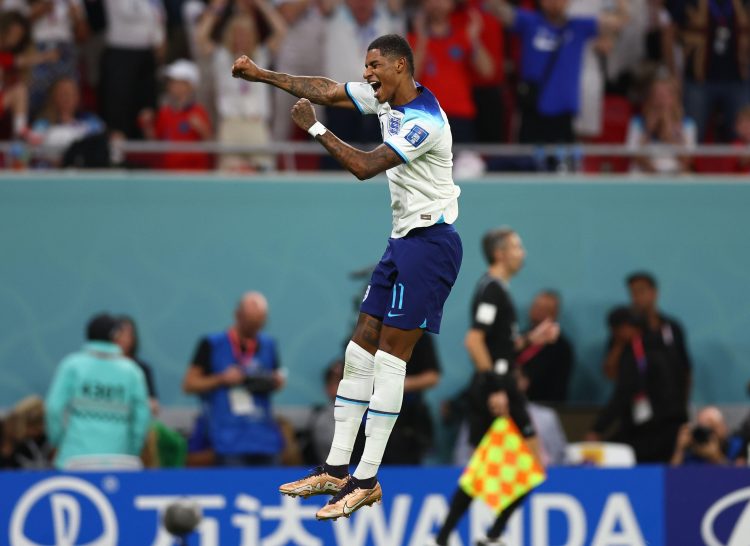 England stormed into the Round of 16 at the 2022 FIFA World Cup with a thumping 3-0 victory over neighbours Wales at the Ahmed bin Ali Stadium in Qatar. The Three Lions hit their stride in the second half, with Marcus Rashford bagging a majestic brace and Phil Foden getting on the scoresheet to put Wales to the sword on Tuesday night.

Gareth Southgate made full use of his 26-man squad for the final group game against Wales. Marcus Rashford and Phil Foden replaced Raheem Sterling and Bukayo Saka on the wings, while Kyle Walker and Jordan Henderson made their maiden starts of the tournament. The changes seemed to have had the desired effect as England dominated the first-half proceedings and should have opened the scoring inside ten minutes through Marcus Rashford.

The Manchester United man was put through by Harry Kane but couldn’t execute his chipped effort over goalkeeper Danny Ward, who snuffed out the danger to keep the scores level. England enjoyed the lion’s share of the possession in the opposition half but couldn’t create many other meaningful opportunities to test the goalkeeper.

Wales were forced to withdraw their talisman Gareth Bale at half-time due to injury, and Gareth Southgate’s side picked up their pace after the break, with Phil Foden winning a free kick in a dangerous position on the edge of the box. Stepping up to take the set piece, Rashford broke the deadlock with a thunderous strike into the top corner.

Having opened the floodgates, England struck again just moments later from the restart. Wales turned the ball over in their own half, and Harry Kane set up Phil Foden at the far post for a simple tap-in to double the lead.

Jordan Pickford made one alert save to deny Kieffer More in the second period, but the Three Lions soon put the game to bed with Marcus Rashford bagging England’s 100th goal at the World Cup. The winger cut inside from the right before squirming a shot through Danny Ward’s legs to make it three. Rashford’s second strike took him to the top of the World Cup goalscoring charts alongside Kylian Mbappe, Enner Valencia, and Cody Gakpo, and sent England into the knockout stages as Group B winners.

Gareth Southgate’s side will face the runners-up from Group A Senegal in the Round of 16 on Saturday, while Wales are knocked out of the competition with just one point and zero goals from open play in their three games.