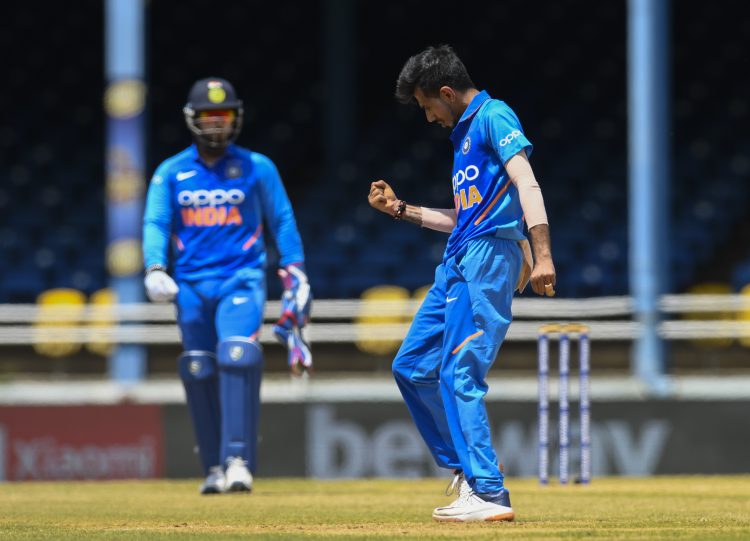 Powered by another phenomenal performance from the bowlers, India sealed the series win against the West Indies with a 44-run victory in the second ODI in Ahmedabad. Following a mediocre performance with the bat, India defended 237 in the second innings thanks to an inspired spell of bowling from Prasidh Krishna, who finished with extraordinary figures of 9-3-12-4 to help the Men in Blue bowl out the visitors in 46 overs for just 193.

Krishna extracted plenty of bounce from the Ahmedabad surface with his hard lengths, and the seamer helped the hosts put pressure on the West Indies early on in their run-chase. After a brisk start from openers Brandon King and Shai Hope at 31 for no loss, Krishna struck first blood with the third ball of his spell as he had Brandon King caught behind on 18. In his next over, Krishna removed Darren Bravo in a similar fashion, angling one away from the left-hander and finding a faint edge.

Yuzvendra Chahal, meanwhile, ended Shai Hope’s struggle of 27 from 54 balls before Krishna struck again in his second spell, dismissing the stand-in captain Nicholas Pooran with an excellent delivery that shaped away and caught the outside edge to give Rohit Sharma a regulation catch at first slip.

The visitors slipped further when Shardul Thakur caught the splice of Jason Holder’s bat with another into-the-deck delivery, leaving the West Indies reeling at 76 for five. Shamrah Brooks, Akeal Hosein and Odean Smith provided some resistance in the lower order to give the tourists some hope, but wickets at regular intervals continued to dent the West Indies’ progress before Prasidh Krishna returned to apply the finishing touches with the dismissal of Kemar Roach.

Earlier in the day, India similarly struggled against the West Indies seamers as the hosts collapsed to 43 for three inside 12 overs. A much-improved Kemar Roach nicked off Rohit Sharma for five while Odean Smith removed his opening partner Rishabh Pant and number three Virat Kohli in the same over to expose the Indian middle order.

Batting at number four on his return to the side, KL Rahul steadied the ship for India following the early wickets alongside Suryakumar Yadav. The vice-captain weathered a testing spell from Jason Holder before cutting loose upon the introduction of Akeal Hosein, carting the left-arm spinner for a six off his first delivery. Rahul picked up the pace after a sedate start, but his innings was cut short on 49 after a mix-up between him and Suryakumar Yadav while running between the wickets.

Yadav carried on following the loss of Rahul to bring up his second ODI fifty, but the Mumbai batter couldn’t convert it into a big one as he top-edged a sweep off Fabian Allen to short fine leg on 63. Deepak Hooda added a vital cameo of 29 to take the hosts past 200, but Alzarri Joseph closed out the innings strongly to limit the hosts to 237.