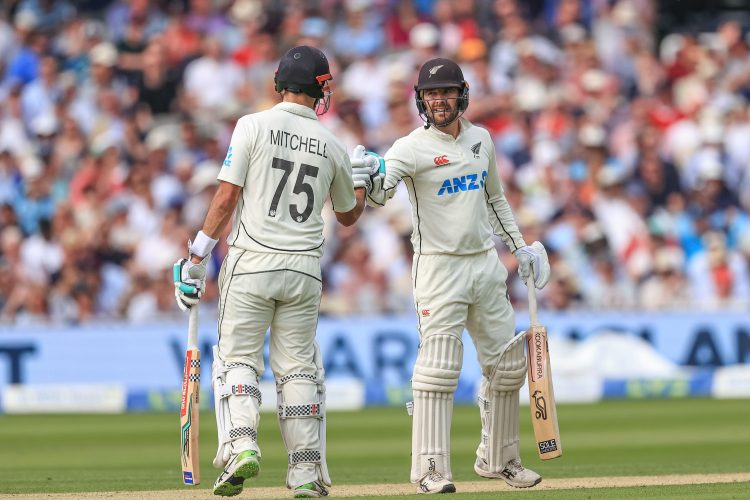 New Zealand piled on the runs on day one of the second Test against England at Trent Bridge as the visitors ended the day in a strong position at 318 for four. It was the familiar duo of Daryl Mitchell and Tom Blundell who combined to frustrate England once again, with the pair scoring half-centuries each and adding an unbroken 149-run stand to put the Kiwis in the ascendency at stumps.

After losing the toss and being put in to bat, stand-in captain Tom Latham – who was filling in for Kane Williamson after a positive Covid-19 test – shared an 84-run opening stand with Will Young to give the tourists a strong platform early on. The pair saw off the new ball with minimal fuss on a green-tinged pitch and managed to score at a healthy pace, with 15 boundaries coming in their partnership.

The Kiwi openers punished anything overpitched from the English seamers and scored at nearly four runs an over in the first hour. Ben Stokes eventually broke the stand in the second over of his spell, nicking off Will Young to second slip after being hit four a couple of boundaries through the covers. Just one ball later, Tom Latham followed his partner back to the pavilion as he pulled Jimmy Anderson straight into the arms of Matty Potts at mid-wicket.

Following that double strike, Devon Conway and Henry Nicholls continued New Zealand’s positive approach, stitching together a stroke-filled 77-run stand to put the pressure back on the hosts. Although Nicholls and Conway both survived some near-misses in the field, the pair regularly found the boundary to extend England’s misery.

Once again, it was Ben Stokes who produced the breakthrough, with Henry Nicholls edging behind to a ball that seamed away before James Anderson removed Conway on 46 three overs later.

England should have had a third wicket in quick succession before Tea, only for Joe Root to drop a regulation chance off Daryl Mitchell at first slip. The Lord’s centurion made the hosts pay for that reprieve as he went after Jack Leach, smashing the left-arm spinner for a couple of fours and a monster six down the ground that landed in a spectator’s pint glass. Mitchell was provided good company by Tom Blundell, and following their 195-run stand in Lord’s last week, the pair brought up another century partnership to ensure England went wicketless in the final session.

The hosts took the new ball with 30 minutes left to play, but poor fielding let them down once again to end the day as Tom Blundell’s outside edge pierced the gap between second and third slip, with both Jonny Bairstow and Zak Crawley remaining motionless and waiting for each other to take the catch.