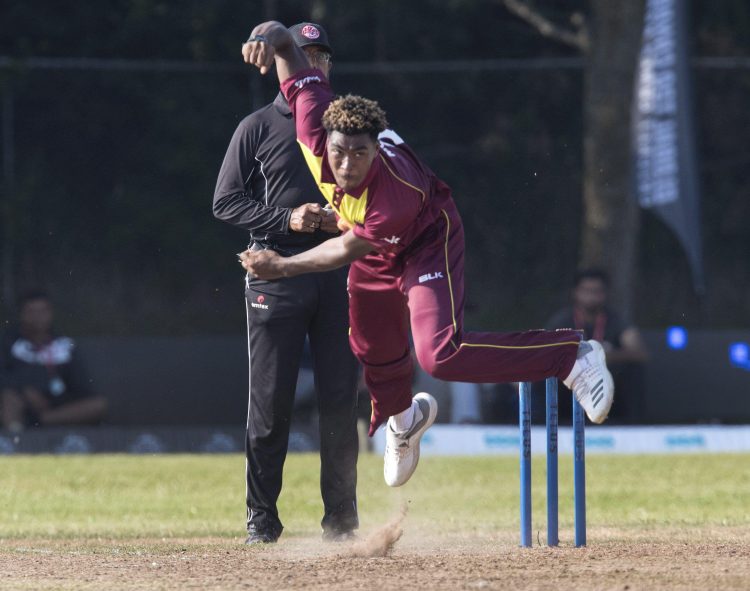 India suffered their first defeat on their tour of the Caribbean as Obed McCoy powered the West Indies to a thrilling five-wicket win in the 2nd T20I at Warner Park in St Kitts. The left-armer registered the best bowling figures by a West Indian in T20I cricket, picking up 6 for 17 to skittle the Indians for 138 all-out. The hosts stuttered in the run chase after opener Brandon King’s half-century, but Devon Thomas sealed the victory with two blows against Avesh Khan in the final over to level the series at 1-1.

After a three-hour delay caused by the belated arrival of the team’s luggage and kit from Trinidad, the West Indies got off to an incredible start as Rohit Sharma departed on the first ball of the game for a golden duck. The skipper was undone by the extra bounce extracted by left-armer Obed McCoy, edging to Akeal Hosein at short third man. After closing out the first over with a wicket maiden, the left-armer removed Suryakumar Yadav in his next over, finding the outside edge with a full-length delivery that enticed the opener into a drive.

India kept on attacking despite the loss of both their openers, with Rishabh Pant launching two sixes behind square on the leg-side. However, this ultra-aggressive approach didn’t bear fruit on a lively surface with the extra bounce as Shreyas Iyer edged behind whilst attempting a massive heave towards the off-side before Rishabh Pant picked out deep-midwicket to depart for a 12-ball 24.

After losing four wickets inside seven overs, the Men in Blue were forced to consolidate through Hardik Pandya and Ravindra Jadeja. The pair kept the scoreboard ticking with a partnership worth a-run-a-ball 43, but just as the all-rounders looked to accelerate, the West Indies pegged India back again.

Jason Holder removed Hardik Pandya with a bouncer before Obed McCoy returned to clean up the lower order. After removing Ravindra Jadeja with a slower delivery in the 17th, the left-armer took three wickets in his final over to pick up his maiden T20I five-wicket haul and wrap up the Indian innings for just 138.

In response, West Indies stormed to 46 for no loss at the end of the powerplay, with Brandon King doing most of the heavy lifting. Hardik Pandya removed Kyle Mayers in the seventh over to break the stand, but Nicholas Pooran clubbed Avesh Khan for two boundaries to put the hosts in a comfortable position with 75 needed from 72 deliveries.

Although the West Indies faltered through the middle as India clawed themselves back in the contest with a few tight overs and key wickets, Brandon King kept the runs flowing before Devon Thomas provided the perfect finish. After clearing the mid-wicket boundary against Hardik Pandya in the 18th, the wicketkeeper smashed Avesh Khan for a six and a four in the final over to take the West Indies over the line with four balls to spare.