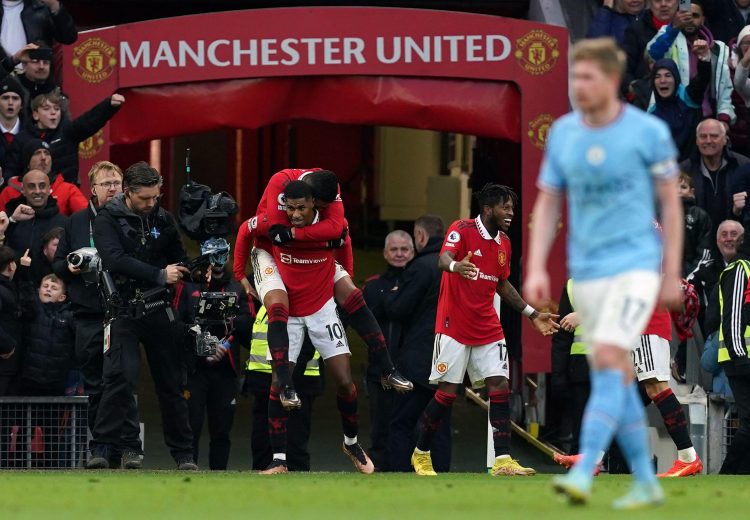 Manchester United produced a dramatic comeback in the final 15 minutes to beat Manchester City 2-1 at Old Trafford on Saturday. The Red Devils fought back admirably after Jack Grealish opened the scoring for the visitors on the hour mark. Bruno Fernandes scored a controversial equaliser in the 78th minute, while Marcus Rashford bagged the winner five minutes later to hand Manchester City a soul-crushing defeat in the red half of the city.

This victory extends Manchester United’s win streak in the Premier League to five matches, temporarily taking them above Newcastle United into third place in the table, one point behind their local rivals.

Having lost the previous meeting against Manchester City 6-3 at the Etihad, Erik ten Hag’s side had a clear game plan heading into this fixture. The Red Devils defended deep in a low block and looked to hurt the visitors on the counter-attack with the pace and movement of Marcus Rashford and Anthony Martial. Manchester City dominated the possession in the first half, but it was United who had the better chances. The Cityzens couldn’t find any way past the United defensive line and were occasionally sloppy on the ball.

Marcus Rashford nearly found the back of the net after Ederson charged off his line, but Manuel Akanji made a crucial stop on the goal-line to deny the Englishman. The Brazilian goalkeeper also made an important save in a 1v1 against the left-winger in the first period, smothering Rashford’s shot to keep the scores level at half-time.

City’s fluid movement and passing improved after the break, and it took just 15 minutes in the second half for the defending champions to break the deadlock. Just three minutes after coming on, Jack Grealish found himself on the end of a Kevin de Bruyne cross, heading home from close range to score his second league goal of the season and give Manchester City the lead.

The goal didn’t dampen the home side’s spirits, though, and Manchester United hit back soon after through Bruno Fernandes. Casemiro’s through ball released Marcus Rashford, but the English forward, who was in an off-side position, didn’t touch the ball, allowing the onrushing Bruno Fernandes to take a shot on goal and find the back of the net. The goal was initially ruled out by the referee but eventually stood after the officials deemed that Rashford didn’t interfere with the play.

Five minutes later, City’s troubles compounded as Marcus Rashford scored the winning goal, getting on the end of a Garnacho cross to give United the lead and send Old Trafford into delirium. This defeat caused City to concede more ground to Arsenal in the title race, with the Gunners opening up an eight-point cap over Pep Guardiola’s side after 18 matches.