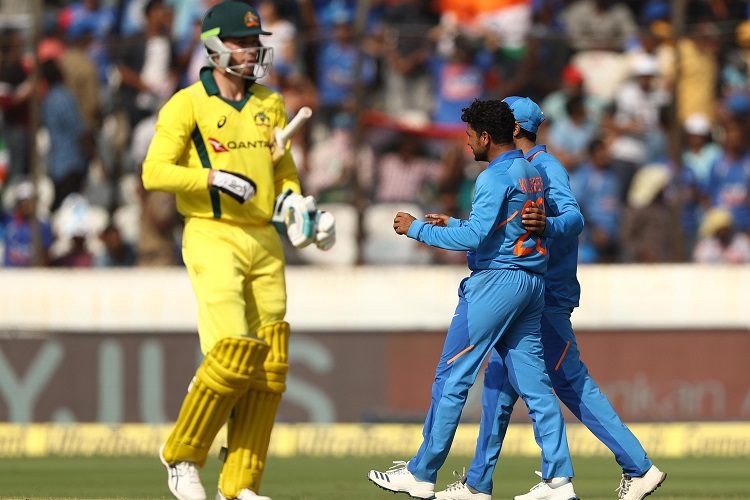 Australia were 0-2 down in the ODI series in India last year. From there they won 3 consecutive ODIs to clinch the series 3-2. That form spilled over to this decade as well, when they thrashed India by 10 wickets in the first ODI, at Wankhede Stadium, Mumbai. The teams will now meet at Saurashtra Cricket Association Stadium, Rajkot.

The Australian fast bowlers – Mitchell Starc, Pat Cummins, Kane Richardson – bowled accurately without compromising on pace and using the bouncer in abundance, while Adam Zampa picked up the big wicket. Shikhar Dhawan (74) and KL Rahul (47) batted well to take India to 134/1 before they lost 4 for 30 in 35 balls and were subsequently bowled out for 255.

David Warner (128*) and Aaron Finch (110*) then pulverised the Indian attack, reaching home in the 38th over without losing a single wicket. It had as emphatic a win as any, and it will take India serious effort to strike back. Mind you, neither Steven Smith nor Marnus Labuschagne has got a chance to bat: they will be only too eager to contribute.

India paid the price of fidgeting with the batting order when Virat Kohli moved down the order to accommodate Rahul at No. 3. They may swap places. Rahul will also be expected to keep wickets, now that Rishabh Pant has been ruled out of the second match after being hit on the head. Kedar Jadhav is likely to replace Pant.

However, India's bowling – typically their stronger suit – could not dent the progress of Warner and Finch. Even Jasprit Bumrah did not appear to be at his best. However, given their overall performance over 2019, they will, in all likelihood, bounce back.

And if that happens, India will definitely take field as favourites.

Of all sides, Australia have bothered India the most. Australia hold a 78-50 lead over India. This includes 4 Australian wins in the last 5 matches, all 4 wins coming on Indian soil.

Virat Kohli (India): The defeat in the first ODI must have hurt Kohli. As we have often see, defeats have almost inevitably led to Kohli getting a big score. The Indian fans would definitely want the pattern to continue.

Adam Zampa (Australia): He might have gone for runs, but Zampa has dismissed Kohli 4 times in 7 innings (including the Mumbai ODI). Their duel will be a sight to behold.

India to win and level the series.
TagsAdam ZampaAustraliaIndiaIndia vs Australia 2018-19Virat Kohli