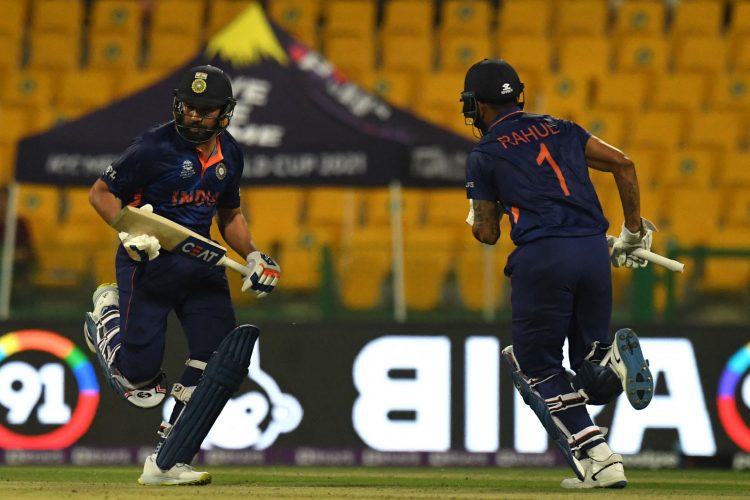 After a rough start against New Zealand and Pakistan, India finally arrived to the party at the 2021 T20 World Cup and registered their first win of the tournament with a dominant performance against Afghanistan in Abu Dhabi. Half-centuries from KL Rahul and Rohit Sharma set the perfect platform for the Men in Blue with the bat before Hardik Pandya and Rishabh Pant provided the lower order pyrotechnics to push India to 210, the highest score of the tournament so far.

It was a total that Afghanistan never looked like chasing, and by the 15th over, damage limitation seemed to be the main priority for Mohammad Nabi’s side. With this win 66-run win, India keep their tournament hopes alive and have also provided a major boost to their net run rate which has jumped from -1.61 to +0.07.

After struggling in the powerplay in their opening two games in Dubai, the Men in Blue got off to the perfect start with the bat in Abu Dhabi, with Rohit Sharma restored to the top of the order alongside KL Rahul. Afghanistan opened the innings with two overs of spin, and Rohit and Rahul took the charge to the bowlers from the outset, scoring 52 runs from the first five overs.

The runs continued to flow as Afghanistan struggled in the absence of Mujeeb Ur Rahman, with both batters reaching their half-centuries and spraying the ball to all parts of the ground. Even Rashid Khan bore the brunt of the assault from the Indian openers, as the pair put on the highest opening partnership (140) for the Men in Blue in T20 World Cup history.

This perfect platform allowed India to go hard at the back end of the innings, and Virat Kohli’s side smashed 68 runs off the final five overs, with Rishabh Pant and Hardik Pandya providing a power-hitting clinic at the death. Pant played a couple of his trademark one-handed sixes in a power-packed cameo off 27 from 13, while Pandya finished with 35 off 13 balls to take India to 210 for two.

In their reply, Afghanistan lost both their openers within the first four overs and further succumbed to 69 for five as the spinners Ravindra Jadeja and Ravichandran Ashwin controlled the middle overs beautifully, picking up three wickets between them.

A half-century partnership between Mohammad Nabi and Karim Janat prevented Afghanistan from further humiliation, and the latter finished with a well-made cameo off 42 from 22 to limit the margin of defeat to only 66 runs.