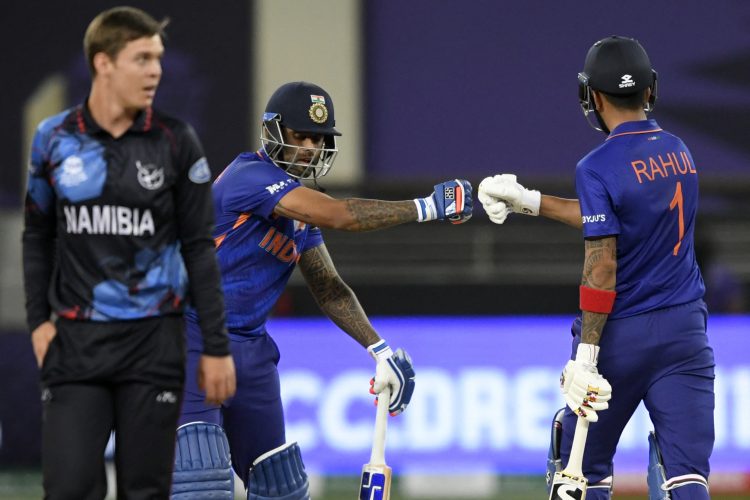 India bid goodbye to the 2021 T20 World Cup in the UAE with a victory as Virat Kohli and co. put in another clinical performance against Namibia to end their campaign on a high. Half-centuries from Rohit Sharma and KL Rahul helped the Men in Blue comfortably secure the win after the spin-duo of Ravichandran Ashwin and Ravindra Jadeja picked up three wickets apiece to restrict Namibia to 132.

India entered the final fixture of the Super 12 stage having already been eliminated from the competition, but there was plenty of emotion as this victory marked the end of the road for Virat Kohli as T20I captain and the coaching trio of Ravi Shastri, Bharat Arun and R Sridhar as part of India’s backroom staff.

Having won another toss, India put Namibia in to bat at Dubai and barring a 33-run opening stand from Stephen Baard and Michael van Lingen it was an innings that never got going from the Eagles. Jasprit Bumrah opened the proceedings in the fifth over with a short ball that van Lingen directed straight to mid-off, and the wickets continued to tumble through the middle overs as Ashwin and Jadeja weaved their magic.

The left-armer had Craig Williams stumped for a duck before firing one into the pads to remove Stephen Baard for 21. Ashwin, on the other hand, used his subtle changes of pace and variations to perfection. The off-spinner induced an outside edge from Loftie-Eaton with a slower tossed up delivery, tricked the captain Erasmus with a carrom ball before dismissing Zane Green with one that held its line and crashed into the middle stump.