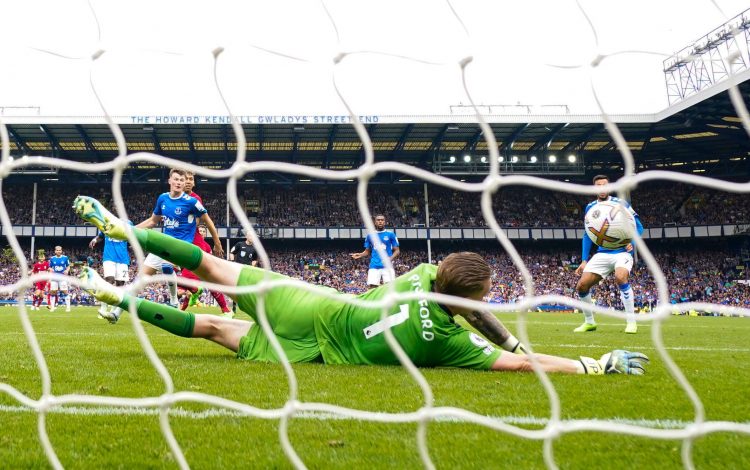 Liverpool’s rough start to the 2022/23 Premier League campaign continued as the Reds were held to their third draw of the season by Everton in an enthralling Merseyside derby at Goodison Park. Jurgen Klopp’s side were unable to find the back of the net despite having 23 shots in the game as Jordan Pickford’s heroics in goal for Everton frustrated the visitors. The Toffees even had a chance to take all three points, but Conor Coady’s second-half goal was ruled out by the VAR for off-side, forcing both sides to share the spoils and settle with a 0-0 draw.

Darwin Nunez returned to the Liverpool lineup for this fixture after serving his three-game suspension, replacing Roberto Firmino in the starting XI, while Fabio Carvalho received his first League start for the Reds following his stoppage-time winner against Newcastle in midweek.

Everton entered the derby without a single victory in their first five games of the season, but Frank Lampard’s side started as the stronger of the two teams. Neal Maupay and Anthony Gordon tested Alisson in the Liverpool goal in the opening half-hour before Tom Davies struck the woodwork with the outside of his boot.

After being subdued for most of the first half, Liverpool’s best chance came in the 43rd minute. Darwin Nunez’s stunning volley was expertly tipped onto the bar by Jordan Pickford before Luis Diaz hit the post from the resulting rebound seconds later. Liverpool grew into the contest in the second half with Roberto Firmino replacing the injured Fabio Carvalho, and the Reds forced Jordan Pickford into action on multiple occasions after the break. The England number one made crucial interventions to deny Harvey Elliott and Darwin Nunez, as well as two excellent saves against Roberto Firmino.

Despite being pinned in their half, Everton retained their threat on the counter-attack, and the Toffees should have taken the lead when Demarai Gray surged forward following a Liverpool corner. The winger picked out Neal Maupay in acres of space in the Liverpool box, but the Frenchman’s effort was aimed directly at Alisson.

The Toffees thought they had the lead three minutes later when Connor Coady bundled in Maupay’s shot across goal, only for VAR to show that the defender had drifted off-side. Liverpool had chances of their own to take the lead, but the Reds couldn’t find a way past Jordan Pickford, who made another magnificent save in the dying embers of the game, tipping Mohamed Salah’s shot onto the post.

With this result, Liverpool have gotten off to their worst Premier League start under Jurgen Klopp – taking nine points in six matches – and the hopes of a title challenge are already beginning to fade with Manchester City opening a five-point gap to the Reds.