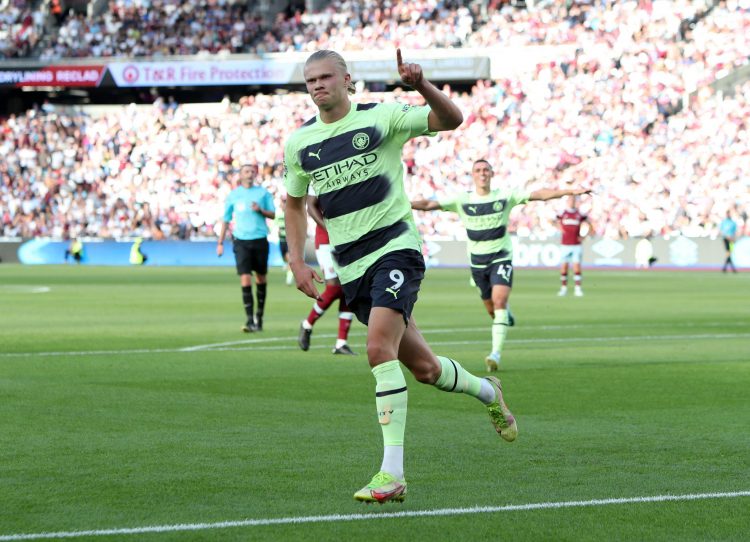 Erling Haaland announced his arrival in the Premier League with a bang as the Norwegian striker scored two goals in his competitive debut for the club against West Ham. Haaland’s brace gifted Manchester City a straightforward opening-day victory over the Hammers at the London Stadium, giving the English crowds a small teaser of his ability in front of goal.

The 22-year-old phenom was Manchester City’s marquee summer signing following his switch from Borussia Dortmund in the transfer window for a reported fee of £54 million, and after an underwhelming introduction in the Community Shield against Liverpool, Haaland hit the ground running in the league.

The former Dortmund striker started alongside Phil Foden and Jack Grealish in the front three, supplied by the creative stars Ilkay Gundogan and Kevin de Bruyne in midfield. Manchester City began slowly as Michail Antonio nearly opened the scoring inside two minutes from a header, but it was just a matter of time before the defending champions parked themselves in the opposition half and dictated the tempo of the game.

Haaland was largely peripheral in the opening period before bursting into life just after the half-hour mark, latching onto an Ilkay Gundogan through ball and skipping past Alphonse Areola before being brought down by the West Ham goalkeeper when through on goal. Stepping up to take the penalty, Haaland nonchalantly sent the Frenchman the wrong way with a finish in the bottom corner to score his maiden Premier League goal and give City the lead heading into half-time.

West Ham improved after the break upon the introduction of Said Benrahma and summer signing Gianluca Scamacca for Lanzini and Antonio, with Declan Rice presented an opportunity to level the scores after Gundogan’s error.

However, in the quest for an equaliser, the Hammers left plenty of open spaces on the counter for Manchester City to exploit, and the defending champions made the most of the wide acreage afforded to them. In the 68th minute, de Bruyne picked the ball up near the centre circle before driving forward and unleashing a defence-splitting pass for Erling Haaland to run onto. The striker did the rest, timing his run to perfection, bursting past Kurt Zouma and side-footing the ball into the bottom corner to double his tally and the lead.

Haaland’s second killed the game off for Pep Guardiola’s side, and the remaining 20 minutes were akin to a training exercise as Manchester City passed West Ham into submission to see off the contest and give their title defence the perfect start on opening day.