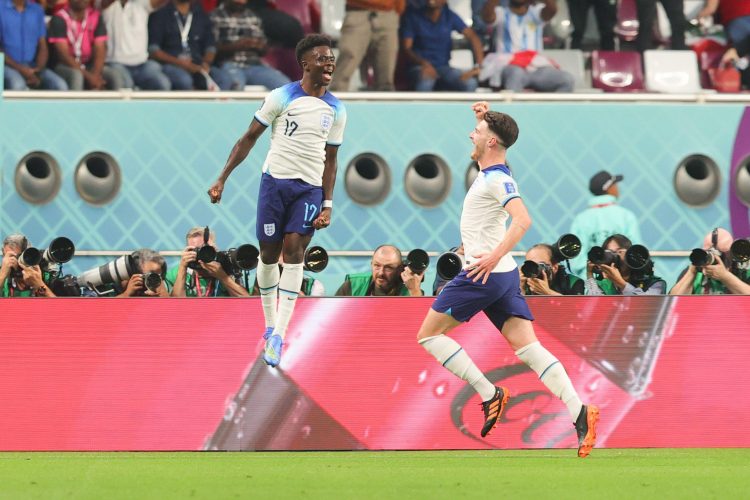 England began their 2022 FIFA World Cup campaign with a bang as Gareth Southgate’s side romped to a 6-2 victory over Iran at the Khalifa International Stadium in Qatar. A brace for Bukayo Saka and goals from Jude Bellingham, and Raheem Sterling gave the Three Lions the perfect start before substitutes Marcus Rahsford and Jack Grealish applied the finishing touches in the closing stages to give England all three points in their Group B opener.

It was an incident-packed event in Doha as Iran suffered an early blow with goalkeeper Alireza Beiranvand stretchered off in the 19th minute after colliding with his team-mate Majid Hosseini while defending a Harry Kane cross. The ten-minute delay robbed England of their fluency in the opening period, but it didn’t take long for Gareth Southgate’s side to display their superiority, with Jude Bellingham opening the scoring in the 35th minute. The 19-year-old got on the end of Luke Shaw’s cross from left-back and buried his header into the far post to score the first international goal of his career.

Picked ahead of Manchester City’s Phil Foden on the right wing, Bukayo Saka doubled England’s tally eight minutes later, firing a stunning volley over a crowd of Iranian defenders into the top corner. Raheem Sterling added a third moments later, expertly redirecting Harry Kane’s fizzed cross into the net to give the Three Lions a comfortable advantage heading into the break.

England’s dominance continued in the second period, with Bukayo Saka grabbing his second goal just after the hour mark. The Arsenal man cut inside onto his stronger left foot and lasered in a neat finish past substitute goalkeeper Hosseini.

Iran managed to pull one goal back to give their fans something to cheer. Porto striker Mehdi Taremi capitalised on a slow reaction from Harry Maguire and lasered a strong finish past Jordan Pickford into the roof of the net. Marcus Rashford restored England’s four-goal cushion just 49 seconds after coming on as a substitute, slotting in a cool finish following another Harry Kane assist. Two more substitutes combined to add England’s sixth, as Callum Wilson unselfishly set up Jack Grealish to put the gloss on the performance.

There was time for another Iranian consolation in the dying moments. The VAR ruled that John Stones had pulled Morteza Pouraliganji’s shirt deep into injury time to give the Asian side a penalty, which was converted by Mehdi Taremi to make it 6-2.

This win takes Gareth Southgate’s side to the top of Group B with three points, and England can cement their position as group winners with another victory over the USA on Friday.