De Villiers blitz puts RCB on top of the table

De Villiers blitz puts RCB on top of the table 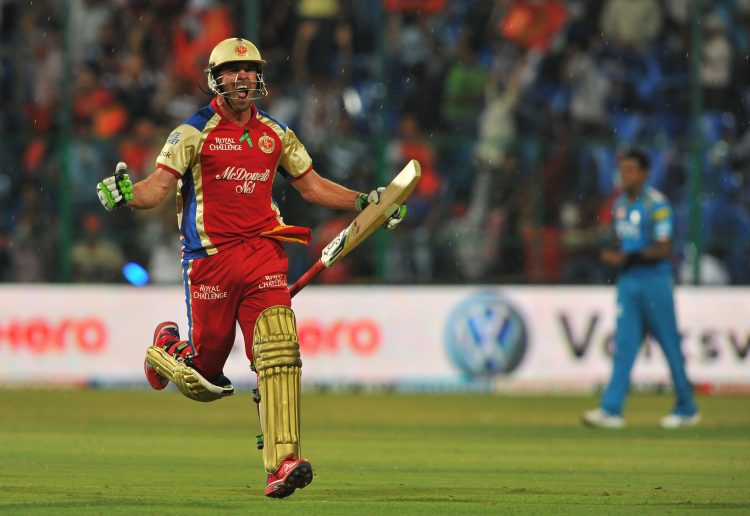 The Royal Challengers Bangalore won their 5th game of this IPL season after beating the Delhi Capitals by the barest of margins in Ahmedabad. Virat Kohli’s side scored 171 in their first innings thanks to an extraordinary onslaught from AB De Villiers in the death overs and eventually won the game by only one run after some inspired bowling from their pacers. Needing 14 runs off the final over, Mohammed Siraj executed his yorkers to perfection against two set batsmen in Rishabh Pant and Shimron Hetmyer to take RCB home and send them to the top of the points table.

RCB did not have the brightest start to the game having lost both their openers Kohli and Padikkal inside the powerplay due to some excellent bowling from Ishant Sharma with the new ball. Following this early setback, Glenn Maxwell and Rajat Patidar were able to temporarily steady the ship but both batsmen failed to capitalise on their starts which put RCB in a tricky position at 114-4 with five overs remaining.

However, from then on, it was the AB De Villiers show. The South African batsman rolled back the years with a vintage performance to remind the whole world that he is still the best in the business. Mr. 360 got to his half-century off only 35 deliveries and ended with 75 runs off 42 after smashing Marcus Stoinis for 23 runs in the 20th over which changed the momentum of the game.

172 was always going to be a tall order to chase but matters were compounded for the Capitals after they lost the orange cap holder Shikhar Dhawan and Steve Smith inside the first four overs. Despite a few gifts from RCB in the field, Delhi were consistently behind the required run rate in the chase and it was only till Shimron Hetmyer arrived at the crease did the momentum swing in their favour. With DC needing 46 off three overs, the West Indian hit three sixes off Kyle Jamieson in the 18th over to bring Delhi back in the game. Unfortunately, Harshal Patel and Siraj closed out the match in the final two overs and Hetmyer was kept off strike for the final 4 deliveries with RCB eventually crossing the line to win by the solitary run.

This victory would give great confidence to Virat Kohli’s side who are now looking like the team to beat in this tournament. They now have a slew of wicket-taking options with the ball while one person consistently puts their hand up with the bat in each game. More crucially, unlike past seasons RCB are thriving under pressure and winning the big moments and are sitting pretty at the top of the table.