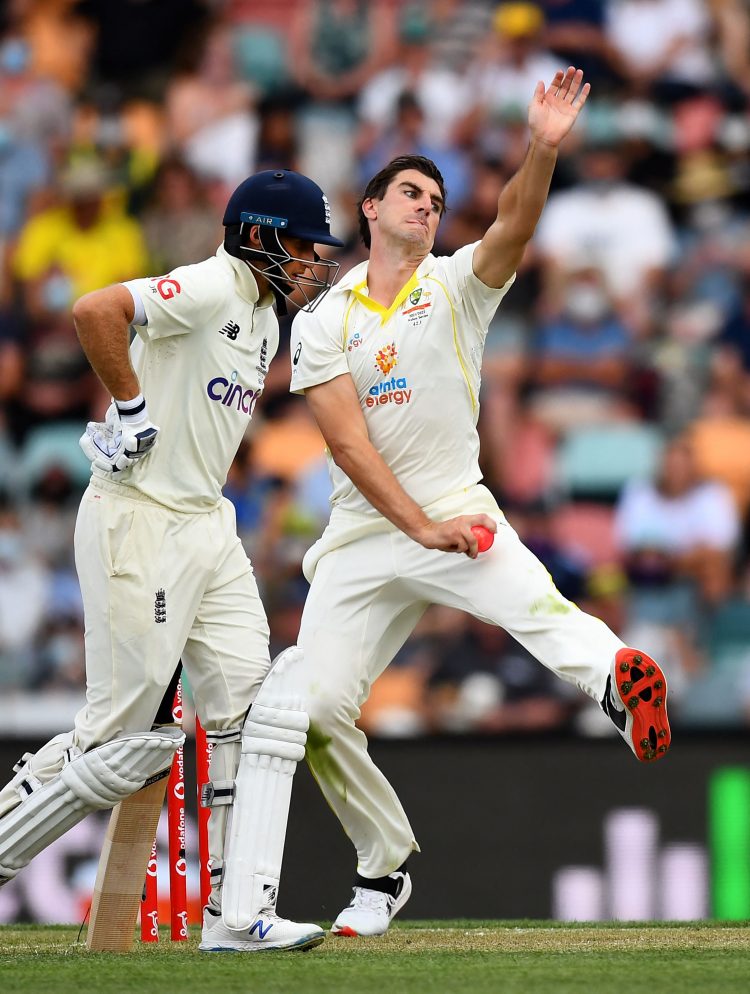 17 wickets fell on an eventful day two of the fifth Test in Hobart that saw Australia consolidate their commanding position in the game to end the day with a healthy lead of 152 runs. Pat Cummins led the charge for the hosts with the ball after the Australian tail wagged in the opening session, picking up four for 45 as the tourists were bowled out for a paltry 188 in 47.4 overs. However, the English bowlers handed Joe Root’s side another lifeline under the lights with the pink ball, removing Australia’s top three cheaply as the hosts finished the day on 37 for three.

After losing two wickets for 11 runs to begin the day, the Australian tail added some precious runs in the afternoon with Nathan Lyon’s priceless cameo off 31 from 27 taking the hosts first-innings total to 303, a score England are yet to surpass in this series.

In reply, England got off to a familiar start with the bat as the tourists’ new-found opening combination of Rory Burns and Zak Crawley lasted only ten deliveries, with the left-hander run out for a duck by a direct hit from Marnus Labuschagne. Zak Crawley followed soon after on 19, bringing Joe Root to the crease at 29 for two to perform another rescue act.

Root temporarily steadied the ship for the visitors alongside Dawid Malan, but Pat Cummins returned to dismiss both batters in the space of three overs, strangling Malan down the leg side before trapping the English captain at the crease with an in-ducker. The visitors dug themselves into a deeper hole when Ben Stokes fell to an acrobatic catch from Nathan Lyon at point while Ollie Pope edged behind to the metronomic Scott Boland on 14.

England were in danger of conceding a major lead at 110 for six, but Sam Billings and Chris Woakes combined to take England past 150 with a pivotal 42-run stand. The wicketkeeper-batsman impressed on debut with some sweetly timed cover drives, while Chris Woakes benefitted from two dropped catches from Australia in the slips to make England’s highest score of the innings. However, Billings eventually holed out to deep fine leg on 29 before Cummins and Starc cleaned up the tail to dismiss the visitors for 188, giving Australia a first-innings lead of 115.

That lead was stretched to 152 by the close of play, but England managed to land a counterpunch with the ball to pick up three wickets before stumps. David Warner completed his pair after guiding one straight to a diving Ollie Pope at point while Marnus Labuschagne gloved one down the leg side to give Billings his first catch in Test cricket.

Usman Khawaja and Steve Smith showed some resistance against the pink ball, but Mark Wood added another to the wicket’s column before the close of play with a fiery bouncer to Usman Khawaja that caught the glove, giving England some hope heading into day three.