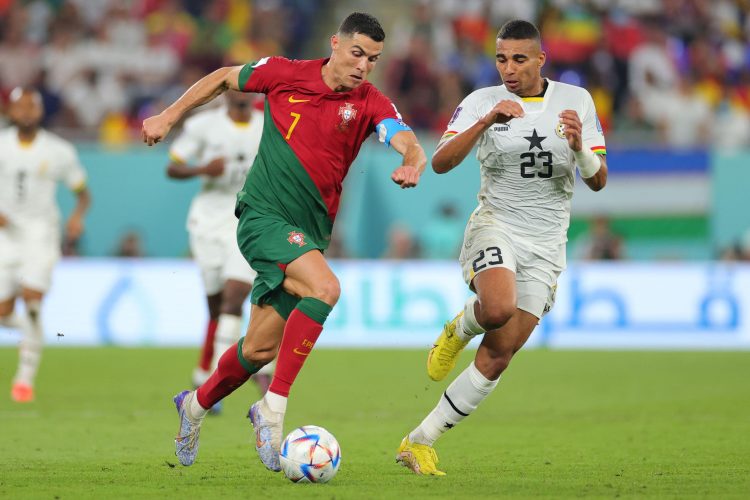 Portugal kickstarted their 2022 FIFA World Cup journey with an eventful 3-2 victory against Ghana at Stadium 974 in Doha. It was a historic night for Cristiano Ronaldo as the Portuguese superstar opened the scoring from the penalty spot to become the first man to score at five different World Cups. Ghana found the equaliser in the 73rd minute through Jordan Ayew, but Portugal produced an instant response with Joao Felix and Rafael Leao netting in quick succession. The African nation mounted a late charge after an 89th-minute consolation from Osman Bukari but eventually slumped to a narrow defeat in their Group H opener in Qatar.

Cristiano Ronaldo was the centre of attention heading into this encounter following the mutual termination of his contract with Manchester United. The 37-year-old should have opened the scoring in the 10th minute but took a heavy first touch after being put through on goal by his former club-mate Bruno Fernandes. Ronaldo even had the ball in the back of the net at the half-hour mark, only for the whistle to be blown for a foul in the build-up to the move.

After a largely uneventful first period, the game burst into life following the break, with both sides showing more attacking impetus. Ghana had their first real sight of goal in the 55th minute, with Ajax forward Mohammed Kudus firing wide off the post from distance. Six minutes later, Portugal were awarded a penalty for a foul on Cristiano Ronaldo in the box by Mohammed Salisu, and the forward made no mistake from the spot to create World Cup history.

Ghana hit back just moments after, with Andre Ayew getting on the end of Kudus’ cross to make it 1-1 and score the first goal by an African nation at this World Cup. However, Ghana’s fightback was short-lived as Portugal re-took the lead after Bruno Fernandes played a sumptuous defence-splitting pass to release Joao Felix, whose chipped finish made it 2-1.

Fernandes produced another vital assist two minutes later to play through substitute Rafael Leao, and the AC Milan man found the far corner with his left foot to score his maiden goal for the national team. Ghana continued to press forward despite the two-goal deficit and added a second goal in the 89th minute through Osman Bukari’s header to create some late tension.

Portugal goalkeeper Diogo Costa almost cost his side the three points in stoppage time after being robbed off the ball by Inaki Williams, but the Ghanaian striker slipped at the wrong moment to spare his blushes and give the European side the victory.