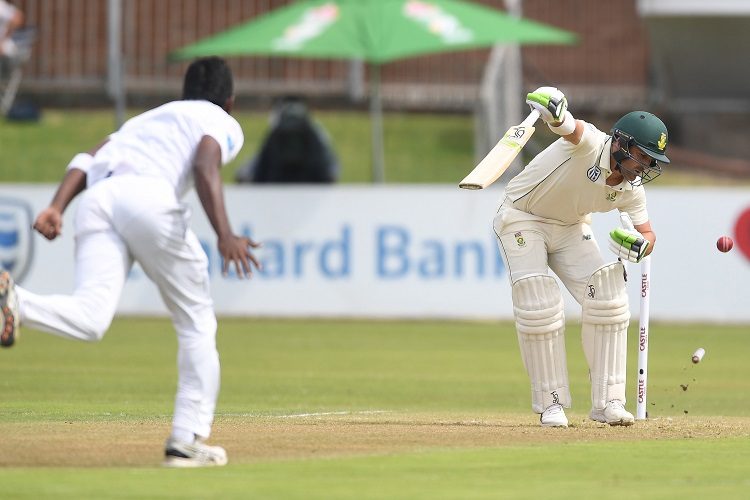 The South African fast bowlers hit back in the final session after being bowled out for 222 on Day One in the second and final Test of the series, at St George’s Park, Port Elizabeth. Sri Lanka finished the day on 60/3.

In other news, Hardik Pandya has been ruled out of the Australia series; Peshawar Zalmi beat Karachi Kings in the PSL; Shreyas Iyer registered the highest T20 score by an Indian; ECB received a near-unanimous approval on the playing conditions of The Hundred; Mizoram Women were bowled out for 9; Alyssa Healy made it to the Guinness Book of World Records; and New Zealand and England announced their respective squads.

Dale Steyn, Kagiso Rabada, and Duanne Olivier then gave a torrid time to the Sri Lankan top-order. They finished the day on 60/3.

A draw here will give Sri Lanka the honour of being the first Asian country to win a Test series in South Africa. That looks difficult, especially after left-arm spinner Lasith Embuldeniya has been ruled out from bowling for the rest of the Test with a thumb injury.

Nabi puts Afghans one up

Ireland hit back, reducing Afghanistan to 50/5. At that stage Afghanistan needed 83 off 80 balls, but Nabi (49*) and Najibullah Zadran (40*) saw them through with 4 balls to spare.

No Hardik for Australia matches

A lower back injury has ruled Hardik Pandya out of the upcoming T20I and ODI series against Australia. He will be replaced in the squad by Ravindra Jadeja, and possibly in the XI by Vijay Shankar. Five months ago, Hardik had to be stretchered off during an Asia Cup match due to a stress fracture.

Batting first at Sharjah Cricket Stadium, Peshawar Zalmi put up 153/8. At one point they were 48/4, but Imam-ul-Haq (56) and Liam Dawson (43) added 76 to lead the recovery before Darren Sammy hit out towards the end. In response, Karachi Kings could manage only 109/9. Hasan Ali did most of the damage, with 4/15.

Batting for Mumbai against Sikkim in a Syed Mushtaq Ali Trophy match at Indore, Shreyas Iyer slammed the highest score by an Indian in T20 cricket. He scored 147 in 55 balls, going past Rishabh Pant’s record of 128 not out. Iyer also hit 15 sixes, 3 fewer than Chris Gayle’s world record. Mumbai’s 258/4 fell 5 short of the highest ever T20 total. They won by 154 runs.

Elsewhere, Cheteshwar Pujara shed off his Test batsman shell to score a 61-ball unbeaten 100 against Railways. However, Railways chased the target down.

The Hundred gets the nod

The playing conditions of The Hundred, the new 100-ball format of cricket to be launched by ECB next year, have received approval from all English counties barring Surrey.

The conditions include eight city-based teams (instead of the traditional county-based structure); 100-ball innings; change of ends after 10 balls; and so on.

Nine ducks in a score of nine

And finally, Mizoram Women slumped to 9 all out against Madhya Pradesh Women after batting for 13.5 overs. Batting at four, Apurwa Bharadwaj (6*) was the only one to get off the mark; the other three runs were extras. The rout was led by Tarang Jha (4/2), while Salonee Dangore took 2/0. Madhya Pradesh took 1 over to chase down.

Alyssa Healy entered the Guinness Book of World Records for catching a cricket ball dropped from a height of 82.5 metres. The ball was dropped from a drone above Melbourne Cricket Ground. Healy broke the record of 62 m, set by Kristan Baumgartner, set in the UK in 2016.

Healy set a new world record thrice on the same day, going on to hold the ball dropped from heights of 62.5 metres, 72.3 metres, and 82.5 metres.

No Buttler, no Stokes

England have announced their squad for the three-T20I series against West Indies. Noteworthy omissions are Jos Buttler and Ben Stokes, both of whom have been rested ahead of the IPL.

Ajaz left out for Tests

Ajaz Patel had played a key role when New Zealand beat Pakistan in the UAE last year but has not been able to maintain those standards at home. New Zealand have now decided to drop him in favour of Todd Astle for the upcoming Tests against Bangladesh.