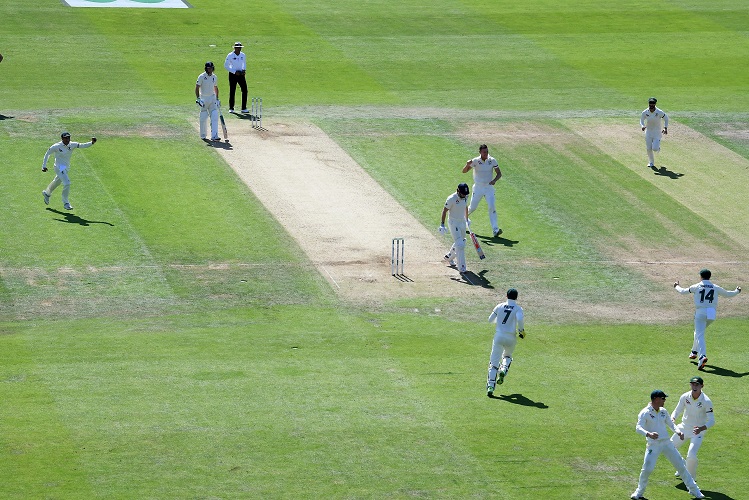 England assumed control of the final Ashes Test after building a 382-run lead by the end of the third day, with two wickets still to go. Elsewhere, Zimbabwe crashed to their second consecutive defeat in the T20I tri-series, and Australia Women win again.

At the fag end of a series largely played in amicable spirit, there were signs of tetchiness in both camps on the third day at The Oval, as England ended the day at 313/8, a lead of 382, against Australia.

Joe Denly scored a Test-best score of 94, and with Ben Stokes scoring 67 and Jos Buttler adding 47, England ensured there were big scores in the line-up to keep the scoreboard ticking, even as the likes of Rory Burns (20), Joe Root (21) and Jonny Bairstow (14), struggled.

Nathan Lyon was the chief tormentor, dismissing both Burns and Root, and ending with 3/65. Australia will hope to pick the remaining two wickets early on day four, and then they will have two days to hunt down a massive target.

Zimbabwe crashed to their second loss of the T20I tri-series against Afghanistan, with Najibullah Zadran hammering a 30-ball 69* – a knock comprising 6 sixes. Afghanistan posted a daunting 197/5, a target Zimbabwe fell short of by 28 runs.

Regis Chakabva tried his utmost to emulate Zadran, scoring a 22-ball 42, but without support from the rest of the line-up, Zimbabwe ended at 169/7.

The defeat left Zimbabwe rooted to the bottom of the table with a negative net run-rate.

Mohammad Hasnain’s no-objection certificate from the PCB has been cancelled, meaning he will have to return to Pakistan from the CPL to play the Quaid-e-Azam trophy.

Hasnain had initially been given an NOC to play the whole tournament in the Caribbean with the Trinbago Knight Riders, but given he is one Pakistan’s brightest prospects, the fact that he would miss the first few rounds of their premier domestic tournament was jarring.

Pakistan have a tour of Australia lined up in November, and with Mohammad Amir retiring from Tests and Wahab Riaz taking an indefinite break, they need their pacemen fit and firing for the longest format.

West Indies’ batting struggles of the ODIs were evident in the T20Is as well, as Australia romped to a six-wicket victory in the first T20I.

West Indies opted to bat, but apart from Stafanie Taylor, the captain, who scored a 51-ball 44, there were few bright spots. Sheneta Grimmond scored a 24-ball 15, in what was the highest score of the innings apart from Taylor. West Indies were restricted to 106/8.

That proved no match against Australia. Despite losing two early wickets – Alyssa Healy and Beth Mooney – the visitors were led by their captain, who scored a run-a-ball 54, as they coasted past the target with 7 balls and 6 wickets to spare.

The second T20I will be played at the same venue on Monday.