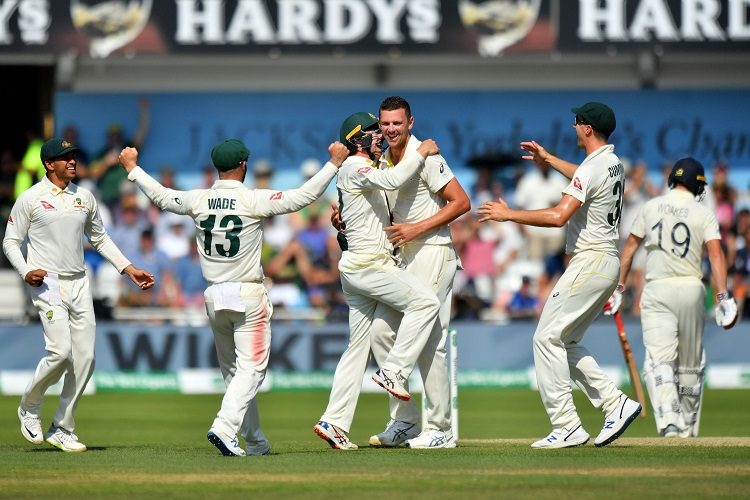 Australia retained the Ashes after beating England by 185 runs in the fourth Ashes Test in Manchester, despite being made to sweat into the final session at Old Trafford. Elsewhere, Afghanistan closed in to within four wickets of what would be a historic win, and Guyana Amazon Warriors won three in a row to top the CPL 2019 table.

Australia retained the urn after beating England in the fourth Ashes Test in Manchester by 185 runs on Monday (September 9). It was the first time they were claiming the Ashes in England since 2001.

England had hopes of fighting for a draw, with the ninth-wicket pair of Jack Leach and Craig Overton batting together for almost 15 overs, and saw off the new ball. However, the unlikely figure of Marnus Labuschagne got the breakthrough, and it didn’t take long for the victory after that.

Earlier, the Australia Women had overseen a dominant Ashes campaign themselves, in what has been a good English summer for the Australians.

Guyana Amazon Warriors made it three victories in three after Nicholas Pooran’s 30-ball 61 and Chandrapaul Hemraj’s 55-ball 63 helped them post a 181-run target for Barbados Tridents.

Their bowlers, with Romario Shepherd leading the way with a 4/13, helped bundle out the Tridents for 133 in 16.4 overs to seal a 47-run victory.

The victory helped Guyana leapfrog Trinbago Knight Riders to the top spot – both teams are level on points, but Guyana have a superior net run-rate.

Afghanistan close in on historic win

Afghanistan are four wickets away from what would be their first ‘away’ Test win in just their third ever Test, after Bangladesh were reduced to 136/6 by stumps on the fourth day.

Bangladesh need an improbable 262 runs more to secure victory, with Afghanistan setting them a 398-run target, and Rashid Khan claiming a 3/46 in the second innings to go with his 5/55 in the first, things look bleak for the home side.

However, there is rain in the air, and Afghanistan will hope it doesn’t hinder their march towards what would be a morale-boosting win for the nation, following their poor performance at the World Cup.

India spin great Anil Kumble has thrown his weight behind the beleaguered R Ashwin, saying despite being left out of the XI in the Tests in West Indies, the Tamil Nadu off-spinner remains the best proponent of the skill for India.

“He is still the best spinner that you have," Kumble told cricketnext.com. "Yes, there have been a few incidents where he has had injuries and not performed to his potential, but Ashwin is your No. 1 spinner in the team. He should be a part of the squad, he should be in the playing XI, you have to make a way of getting him in.”E