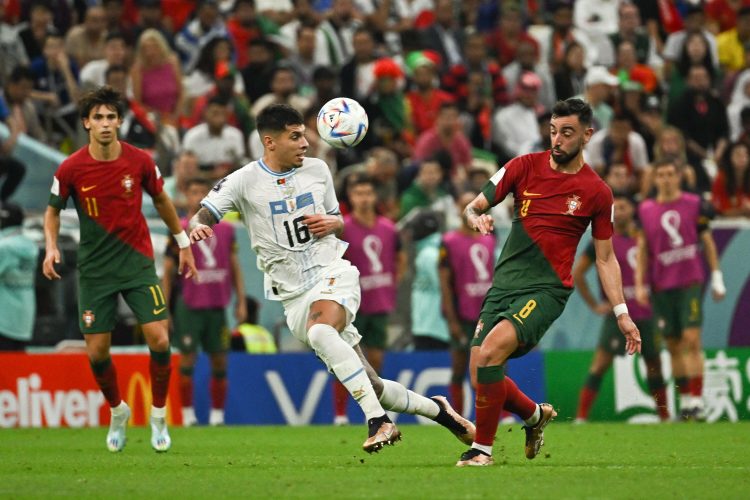 Portugal became the third nation after France and Brazil to secure their passage to the round of 16 following their comfortable 2-0 win over Uruguay at the Lusail Stadium in Qatar. Bruno Fernandes continued his stellar form for his nation on Monday night, scoring a second-half brace to give Portugal the three points against the team that knocked them out of the previous World Cup in Russia.

The European side started the game on the front foot, with Cristiano Ronaldo using his shoulder to set up William Carvalho for a shot from the edge of the box, whose volley went flying over the bar. Bruno Fernandes and Jose Gimenez had sighters on goal in the opening exchanges, but neither side fashioned any substantial opportunity in the first half hour. The best chance of the half fell to Tottenham midfielder Rodrigo Bentancur in the 32nd minute, who mazed his way past multiple Portugal defenders but was denied by goalkeeper Diogo Costa.

Portugal found more joy in attack after the break and finally opened the scoring in the 54th minute through Bruno Fernandes. The Manchester United man curled in a cross that looked to have crept in off the head of Cristiano Ronaldo. However, further replays showed that the 37-year-old failed to get any touch on the ball, with the goal credited to his former club-mate.

Uruguay sprung forward after going 1-0 down and were inches away from levelling the scores as Maxi Gomez’s strike rattled the post in the 75th minute. Luis Suarez and Giorgian de Arrascaeta also went close in the final 15 minutes, but the game finally fell away from their grasp after the VAR awarded a penalty to Portugal in the dying moments of regular time for a handball by Jose Maria Gimenez.

With Ronaldo off the pitch, Fernandes stepped up to convert the penalty to put the game to bed. The midfielder also had a chance to bag the first hat trick of the World Cup in added time, the 28-year-old’s strike from the edge of the area rattling the post.

This result confirms Portugal’s berth in the last 16 and Cristiano Ronaldo’s side will need just a single point against South Korea on Friday to secure their spot as group winners. Uruguay, meanwhile, are lingering at the bottom of the table and will need to beat Ghana in their last match and hope for a Portugal victory over South Korea to progress to the next stage of the tournament.