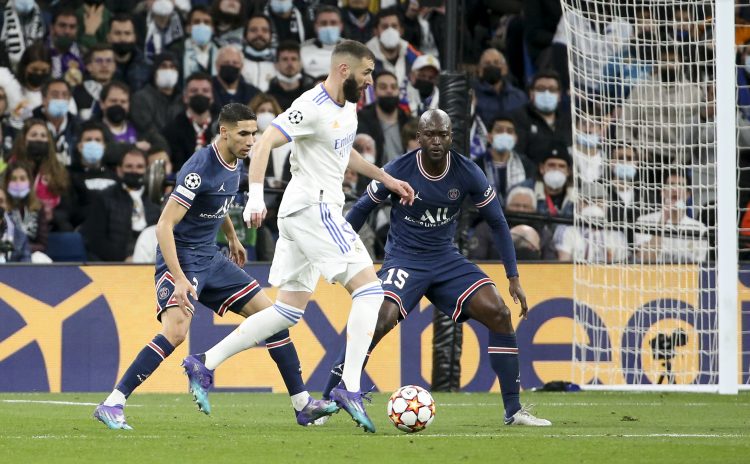 Karim Benzema lifted Real Madrid from the depths of despair in the second half of the Champions League return leg at the Santiago Bernabeu, scoring a 17-minute hat-trick to help Los Blancos overcome a two-goal deficit and knock out PSG in the Round of 16. For most of the night, PSG and Kylian Mbappe seemed destined to reach the quarter-finals, but the French giants capitulated in the second period as Real Madrid and Karim Benzema pulled off a dramatic turnaround in front of their home crowd to advance to the last eight.

PSG arrived at the Bernabeu with a 1-0 lead from the first leg at the Parc des Princes and barring a few opportunities for Vinicius Jr early on, the visitors dominated the opening exchanges. On a pitch that included Lionel Messi, Neymar, Karim Benzema and Luka Modric, it was Kylian Mbappe who ran the show. The Frenchman drew a save from Thibaut Courtois early on before finding the back of the net with an excellent low shot, only for left-back Nuno Mendes to be ruled offside in the build-up.

Mbappe did get his moment in the spotlight when Neymar released the Frenchman into acres of space in the opposition half in the 39th minute. The forward burst past the last line of the Madrid defence before eyeing up Courtois and rifling the ball into the near-post corner to give PSG a 2-0 advantage pn aggregate before the break.

Mbappe’s speed and movement continued to haunt the Madrid backline as the 23-year-old had another goal ruled out for offside in the second half and was also denied by an excellent recovery from David Alaba after the Frenchman zoomed past Eder Militao. However, from that moment on, PSG’s control over a tie that had appeared to be wrapped up slowly began to wither away. An error from Gianluigi Donnarumma at the hour mark was the catalyst for Madrid’s recovery with Karim Benzema halving the deficit, slotting home into an empty net after the Italian was caught in possession.

The Frenchman’s strike galvanised the 13-time European Champions, and PSG crippled under the weight of expectations, with Benzema levelling the scores on aggregate after an incising run and pass from Luka Modric. The 34-year-old’s clinching third goal came from kick-off itself, latching onto a poor clearance from Marquinhos and expertly guiding the ball into the corner with the outside of his boot to put Real in front.

Benzema’s incredible treble left Mauricio Pochettino’s side stunned, and aside from a Lionel Messi free-kick that blazed over the bar, PSG were unable to muster a single meaningful chance to spoil the Real Madrid comeback. This crushing 3-1 defeat is the latest in a long line of Champions League disappointments for PSG, with the Qatari-owned club unable to make headway in a competition that has come to define their success over the past decade.

Madrid, on the other hand, continue their search for a record-extending 14th title in this competition, and after Wednesday night’s turnaround, it would be foolish to think they can’t go all the way.