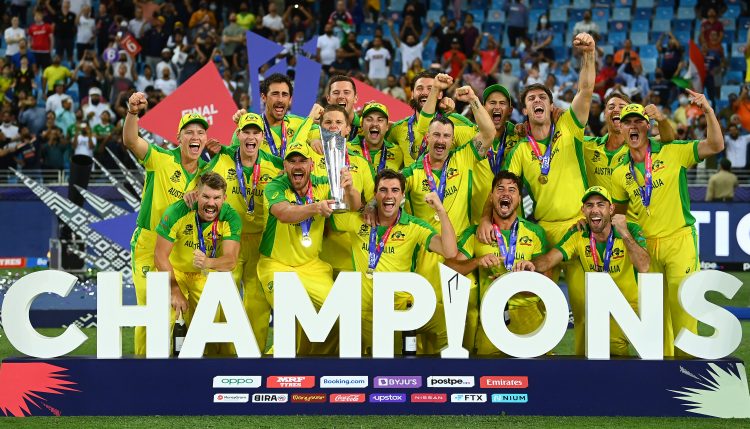 Australia powered their way to their maiden T20 World Cup title in Dubai with a comfortable eight-wicket win over New Zealand in the final. Kane Williamson (85 off 48) provided a batting masterclass in the first innings to take New Zealand to 172, but half-centuries from Mitchell Marsh (77* off 50) and David Warner (53 off 38) took Australia home in style with seven deliveries to spare.

This victory culminates a fantastic turnaround in the shortest format from Aaron Finch’s side, who entered the tournament as the number 6 ranked T20I side having lost each of their last five bilateral T20I series.

Australia dominated the final from the moment Aaron Finch called correctly at the toss and put the Kiwis in to bat, with the bowlers doing an excellent job to restrict the Kiwi openers in the powerplay. Josh Hazlewood removed the star of the semi-final – Daryl Mitchell – in the 4th over and the final 17 balls of the powerplay yielded only five runs.

Martin Guptill started strongly in the powerplay but was unable to accelerate against Adam Zampa through the middle overs and eventually perished for a match-losing knock of 28 from 35 balls. Williamson suffered a similarly shaky start, scoring only 18 from his first 19 balls, but the New Zealand captain shifted through the gears excellently after being dropped by Josh Hazlewood at deep fine leg.

Williamson deposited Glenn Maxwell for two consecutive sixes before pummelling Mitchell Starc for five boundaries in a 22-run over. The Kiwi number three raced to a 33-ball fifty and finished with a stunning 85 off 48 to take New Zealand to a respectable total of 172.

Unfortunately for the Blackcaps, Williamson’s efforts were in vain as the Aussie duo of David Warner and Mitchell Marsh chased down the total with ease as the dew took effect in the second innings. Australia lost their captain Aaron Finch early on to Trent Boult, but they continued to put their foot on the pedal with Mitch Marsh creaming three boundaries off his first three balls from Adam Milne.

Marsh feasted on anything short from the Kiwi quicks while Warner took apart the spinners – Sodhi and Santner – as the pair put on a 92-run stand that took the game away from New Zealand. Boult returned in the 13th over to castle David Warner on 53, but Mitchell Marsh carried on the onslaught – bringing up the fastest half-century in a T20 World Cup final in only 31 deliveries.

The all-rounder put on another 66-run partnership with Glenn Maxwell, who scored 28 of 18 and hit the winning runs for Australia with a switch-hit for four against Tim Southee to start the celebrations. With this win, Australia maintained their unbeaten streak against New Zealand in ICC knockout games and have finally added a T20 World Cup title to their cupboard to go alongside their five trophies in the 50-over edition.