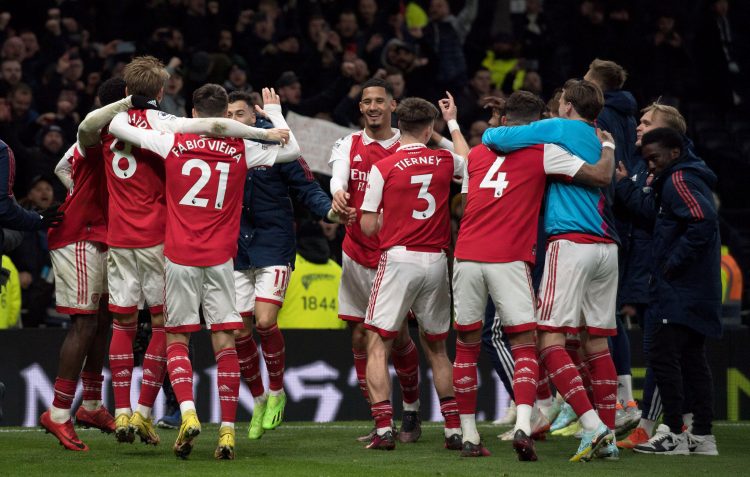 Mikel Arteta and Arsenal took another crucial step to winning the 2022/23 Premier League title as the Gunners beat Tottenham 2-0 in the North London Derby on Sunday night. The visitors dominated their local rivals at the Tottenham Hotspur Stadium and completed the double over Antonio Conte’s side in the Premier League. Hugo Lloris scored a calamitous own goal to kick things off for the Gunners before a Martin Odegaard strike in the first half gave the league leaders a comfortable victory on enemy territory.

The Gunners haven’t won away to Tottenham since the 2013-14 season, but Mikel Arteta’s side overwhelmed their opposition from the first whistle. Arsenal pressed from the front with intensity and nearly opened the scoring as they forced Hugo Lloris into a mistake in possession in the early exchanges, but Eddie Nketiah couldn’t find the back of the net following the turnover. However, it didn’t take long for the Gunners to convert their possession into a lead as they found the back of the net in the 14th minute thanks to an own goal from the Spurs goalkeeper.

Bukayo Saka drove at Ryan Sessegnon from the right wing, and his cross took a deflection off the wing-back, leading to the French keeper spurning his stop and spilling the ball into the back of the net to give Arsenal the lead. Mikel Arteta’s side pushed on after the opening goal. The Gunners carved out plenty of chances in the first period, with Martin Odegaard testing Lloris from distance and Thomas Partey rattling the woodwork with a thunderous strike.

Aaron Ramsdale made one crucial save to deny Heung-Min Son, and Arsenal doubled their lead shortly after, with Martin Odegaard firing in his eighth league goal of the season. The captain received the ball from Bukayo Saka in acres of space and unleashed a stinging effort from outside the box to find the bottom corner.

Having taken a 2-0 lead, the Gunners controlled the game without the ball in the second period. Tottenham ventured forward to try and create an opening, but the hosts could not find a way past Aaron Ramsdale, who made two magnificent saves to deny Harry Kane and Ryan Sessegnon to maintain the Arsenal clean sheet. The Gunners had a chance to make it 3-0, but Eddie Nketiah couldn’t convert on the counter.

This win takes Arsenal to their best points tally at this stage of the season in their history, extending their lead at the top of the table over Manchester City to eight points.