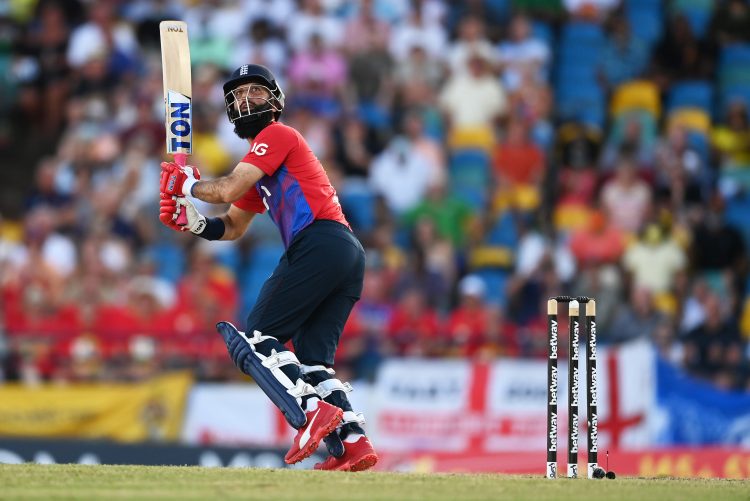 England drew level at 2-2 in the five-match T20I series against the West Indies in Barbados, thanks to a phenomenal all-round performance from stand-in captain Moeen Ali. Leading the team in the absence of the injured Eoin Morgan, Moeen Ali scored a lightning 28-ball 63 to take England to 193 in the first innings before dismissing both West Indies openers in his spell of two for 28 to help the visitors pull off a comfortable 34-run victory on Sunday.

Having been put in to bat by Kieron Pollard, England managed a sedate start to the innings with Tom Banton dismissed in the second over and Jason Roy managing just 11 runs off his first 19 deliveries. However, the opener eventually got over his initial struggles to help the visitors put on 84 runs in the opening ten overs of the innings alongside James Vince. Roy reached his half-century off 34 deliveries, but struggled thereafter, scoring just two runs of his final eight balls as the West Indies dismissed both set batters in successive overs to dry up the runs through the middle.

England put on only 134 runs in the first 17 overs of the innings, but the captain Moeen Ali turned the game on its head in the death overs to help the visitors score an unprecedented 59 runs off the final 18 deliveries. The all-rounder creamed four consecutive sixes in a 28-run 18th over from Jason Holder before adding two more off Romario Shepherd to reach his half-century off just 23 deliveries. Ali eventually fell for 63 in the first ball of the final over, but Sam Billings struck two maximums off the last two balls of the innings to take England to 193 for six.

In reply, the West Indies started brightly in their run-chase, putting on 56 in the powerplay without losing a wicket as Kyle Mayers shined on his return to the side in place of Shai Hope, creaming Tymal Mills for three boundaries in three balls. However, the English spinners applied the brakes on the West Indian innings after the first six, with Moeen Ali dismissing both openers before Adil Rashid and Liam Livingstone made further inroads through the middle overs.

Ali had both openers caught in the deep at long-on and long-off while Adil Rashid cleaned up the centurion from the third T20I Rovman Powell with a googly. The hosts sent Jason Holder up the order as a pinch-hitter and managed to score 49 runs between overs 14-16 to keep the chase alive, but Reece Topley and Chris Jordan held their nerve at the death to help England secure the victory and set up the series decider in the fifth and final T20I.