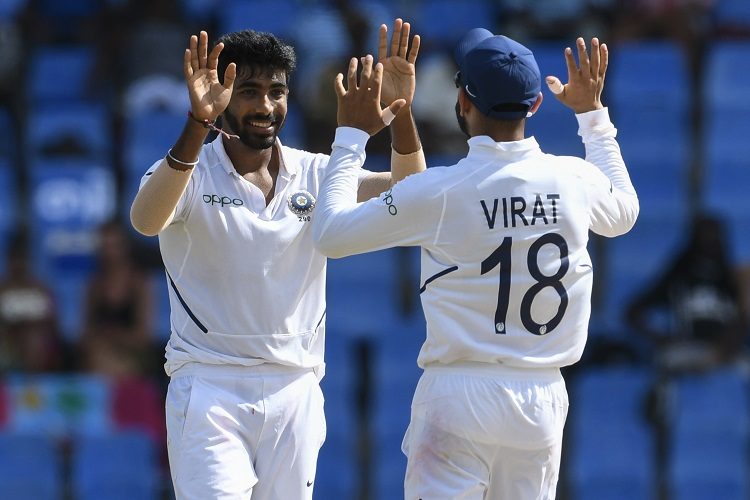 India are in firm control in Antigua after half-centuries from Virat Kohli and Ajinkya Rahane gave them a lead of 260 by stumps on the third day. India were 185/3, with Kohli on 51* and Rahane on 53*, and with two days left in the game, India will look to post a mammoth total and bundle out West Indies for a small total, much like they did in the first innings when the home side were kept to 222.

The second day began, however, with West Indies resuming on a tenuous 189/8. With Jason Holder, the captain, in the middle and adding a quick 29 runs, they managed to reduce the deficit to India to 75 – still a significant concession. India had to see off a few tricky overs before lunch, but on resumption, things were fairly even for a while – all of KL Rahul, Mayank Agarwal and Cheteshwar Pujara got starts, but weren’t able to convert them into anything substantial.

However, it was then that Kohli and Rahane got together. Rahane was altogether more comfortable in the middle, having been a tad nervous in the initial stages of his first-innings 81, although he was fortunate John Campbell dropped him for 17 off Kemar Roach. The paceman threatened both batsmen for a while, beating their bats a few times, but he was unfortunate not to get anything more from his spell.

Once the two batsmen settled, West Indies were up against it. There weren’t too many boundaries – together Rahane and Kohli hit five – but hard and smart running was key in their 104-run partnership, and once they settled down in the middle, they weren’t troubled too much. The partnership is ominous for West Indies.

West Indies’ best hope on the fourth morning is to break the stand while the batsmen look to settle in again. The game is already seemingly beyond their reach, and once Kohli and Rahane settle in on the fourth morning, things can get out of hand. Already West Indies face a tough task, with the likes of Hanuma Vihari, Rishabh Pant and Ravindra Jadeja still to come.

Kemar Roach will be key to the home side’s hopes. He was excellent without luck on the third day, and he’ll need to continue ploughing it out and hoping for better fortune.