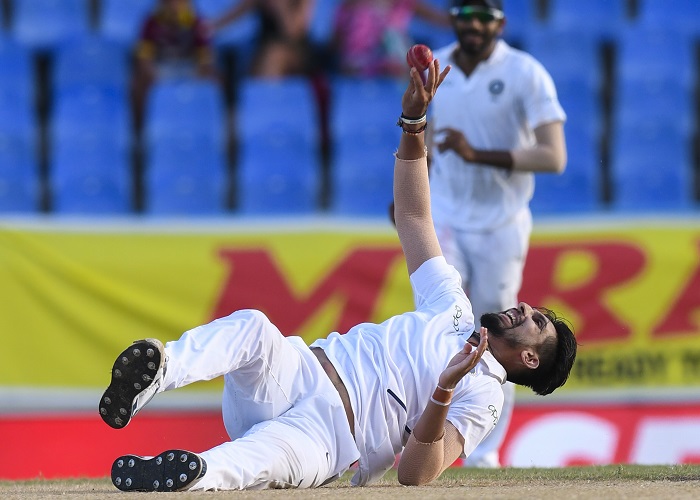 A relentless Indian attack reduced West Indies to 189/8 at stumps on Day 2, 108 behind India on first innings. With 5/42 – of which two were caught and bowled – Ishant Sharma was the leader of the pack. Ishant also found support from his teammates Jasprit Bumrah, Mohammed Shami, and Ravindra Jadeja.

Jason Holder is still on there, on 10, as is a scoreless Miguel Cummins. They need to keep India at bay for as long as possible on the third morning.

India lost Rishabh Pant early in the morning, caught at second slip off Kemar Roach (4/66). But Ishant stayed put, helping Jadeja (58) put on 60 for the eighth wicket before being undone by a yorker from Shannon Gabriel (3/71). Shami did not last, and Jadeja went after the bowling before top edging a hook.

In response, John Campbell set off in cavalier fashion before being yorked by Shami. Ishant caught Kraigg Brathwaite off his own bowling, Jadeja had debutant Shamarh Brooks caught at slip, and Bumrah trapped Darren Bravo leg-before. West Indies were left reeling at 88/4.

Roston Chase counterattacked for his 48, adding 42 with Shai Hope before Ishant broke through. He had Chase playing tamely to short mid-wicket; then, following a 44-run stand, he had Hope caught behind; caught Shimron Hetmyer off his own bowling; and Roach caught at slip.

Cheteshwar Pujara (India): Pujara had put up a performance of a lifetime in Australia this winter. He did fail in the first innings, but he had made scoring look easy in the tour match. It is time for one of those massive scores.

India to take the two West Indian wickets quickly and bat through the day.