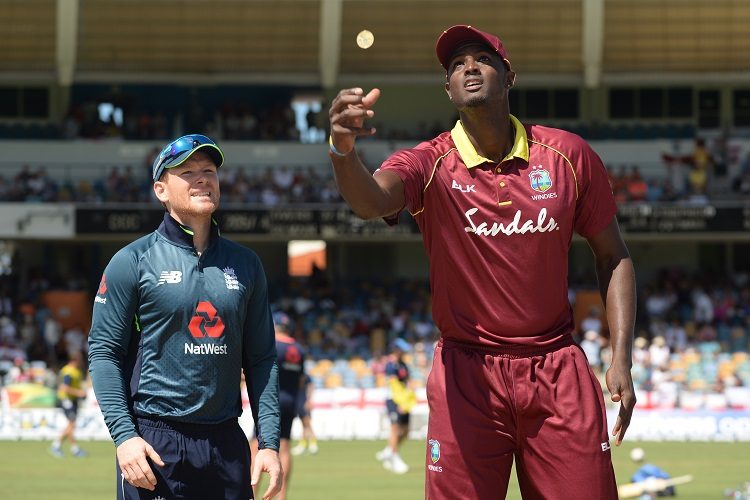 BRIDGETOWN, BARBADOS - FEBRUARY 20 : Jason Holder of the West Indies tosses the coin watched by Eoin Morgan of England before the first one-day international between the West Indies and England at Kensington Oval on February 20, 2019 in Bridgetown, Barbados. (Photo by Philip Brown/Popperfoto)

England and the West Indies will go once again on Friday, 22 February, in Barbados, and Jason Holder will hope for a better performance from his bowlers.

He will need it. There’s still a way to go in the five-match series, but if this England side gain a 2-0 lead, West Indies might never catch them.

The West Indies lost the first ODI by six wickets, despite posting their highest ever total in the Caribbean, and the blame for that lies squarely with the bowlers and the fielders.

Jason Roy and Joe Root scored centuries to ease England through, but it would never have come to that had the West Indies fielders held on to the chances – Roy was given as many as four lives, while both Root and Jonny Bairstow received lifelines. Holder, the West Indies captain, admitted his bowlers needed to “tighten” up as well.

Wednesday’s result was only in keeping with West Indies’ form against England at the Kensington Oval. The two sides have clashed 11 times at the venue over of the years, but the West Indies have lost on seven occasions. The loss on Wednesday was their third straight loss to England at the venue.

In fact, even overall, the West Indies have lost more often than they have won at this ground. In the 30 ODIs played at the venue since 1985, they have lost as many as 18 matches. The last time they won at this venue was in 2016 when South Africa paid a visit.

There is some rain forecast for Friday, though. And that will have to be factored in at the toss.

Chris Gayle (West Indies): The West Indies opener seemingly came good on his warning to the England bowlers – he hammered 12 sixes and three fours on his way to a 129-ball 135. However, the strike-rate of 104.65 has come in for criticism. Did Gayle take too much time at the top?

While there is merit to the talk that his knock kept the innings together and allowed the West Indies to flourish late on, he has still come under criticism for taking too much time to get going. Will he change his approach in second ODI? Unlikely. But that can mean there’s another century on the cards.

Ben Stokes (England): Even as the England bowlers were tonked all over the park by various West Indies batsmen, Stokes – who has an unfortunate history with the West Indies – stood out with excellent figures of 3/37 in his eight overs. He saw the chase through as well, with a 25-ball 20*, and you get the feeling he will play a big role in the second ODI.

Prediction
England to win, comfortably, and make it 2-0.