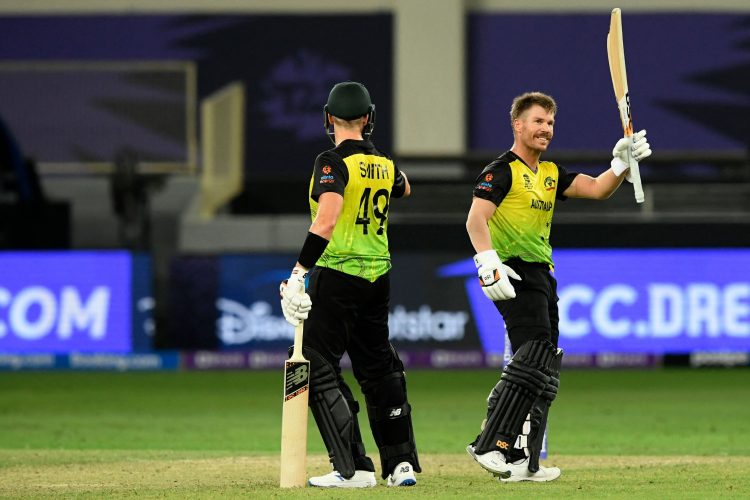 Australia registered their second win of the Super 12 stage with a commanding display against Sri Lanka in Dubai that lifts them to the top of Group A alongside England. After a bright start in the powerplay, Sri Lanka were pegged back by an inspired spell off 2 for 12 from Adam Zampa in the middle overs before David Warner returned to form after a disappointing IPL, scoring a timely half-century that took Australia to a comfortable victory.

Sri Lanka showed plenty of intent early on against Australia, with Charith Asalanka carrying on from where he left off against Bangladesh. The Lankans targeted the fifth Australian bowler throughout the innings and took 16 runs off Maxwell’s over to finish the powerplay at 53 for 1. However, Zampa’s introduction in the 8th over changed the game as the leg-spinner removed the dangerous Asalanka and Avishka Fernando while conceding only 12 runs in his four-over spell.

Zampa formed a good partnership with left-armer Mitchell Starc at the other end, who cleaned up Kusal Perera with a scorching yorker before getting Wanindu Hasaranga to edge one to the keeper as Sri Lanka slipped from 78 for 1 to 94 for 5 within the space of three overs.

Bhanuka Rajapakse’s late-overs cameo took Sri Lanka to a respectable total of 154, but it was never going to be enough to stop the power-packed Australian lineup on what was the best batting surface of the tournament. Australia’s opening partnership of David Warner and Aaron Finch had struggled in the months leading up to the tournament, but the experienced pair finally delivered as they put on 63 in the first six – the highest powerplay score of the tournament so far.

Finch led the charge with two boundaries through the off-side from Karunaratne’s opening over before David Warner got in on the action with his trademark reverse sweep against mystery spinner Theekshana. Warner benefitted from some good fortune with Kusal Perera dropping a regulation catch behind the stumps off Chameera, but the left-hander made the most of his luck as he blazed away to a 31-ball half-century.

Wanindu Hasaranga made things interesting in the middle overs with the two quick wickets off Aaron Finch and Glenn Maxwell, but Warner and Smith shared a brisk half-century partnership to ease the tension before Marcus Stoinis provided some fireworks to give Australia the victory with three overs to spare.

With this win, Australia jump to second in the table with four points on the board and will meet the only other unbeaten team in the Group – England – in Dubai on Saturday.