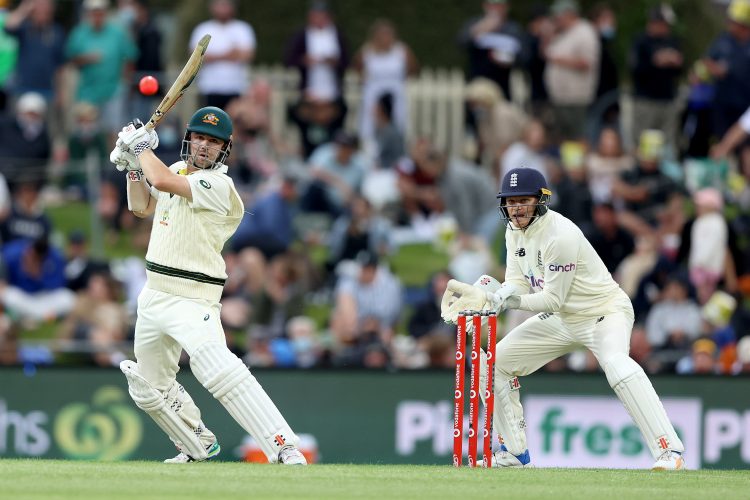 Travis Head’s free-flowing century outlined another successful day for Australia in the first-ever Ashes Test played at the Bellerive Oval in Hobart, helping the hosts recover after the top order collapsed to 12 for three inside the opening ten overs. The South Australian was given good company by Marnus Labuschagne (44 off 53) and Cameron Green (74 off 109) and took the hosts to 241 for six before the rain called for an early close of play.

Having won the toss and opted to bowl first on a green seamer, England enjoyed their most fruitful session on the tour after making five changes to the team that hung on for a valiant draw in Sydney. Stuart Broad and Ollie Robinson made the new ball talk under cloudy skies in the opening hour and were dutifully rewarded as Australia collapsed to 12 for three. Robinson removed David Warner for a 22-ball duck with a delivery that angled away from the left-hander before Stuart Broad nicked off his new opening partner Usman Khawaja to first slip, denying him a chance to repeat his Sydney heroics.

Ollie Robinson could have also had Marnus Labuschagne for nought, only for Zak Crawley to dive across Joe Root at first slip and offer the world number one ranked batter a second life. However, Robinson did strike again in his opening spell, dismissing Steve Smith for a duck to put Australia in a rare position of discomfort in the series.

Unfortunately for England, they couldn’t capitalise on their early strikes as Marnus Labuschagne and Travis Head combined to launch the counter-attack. Head returned to the side following his Covid-enforced absence in Sydney and took the charge to the English bowlers, scoring 26 runs off his first 20 deliveries to relieve the early pressure.

The number five was given good company by Marnus Labuschagne, who hit nine fours in his innings of 44 before falling in bizarre fashion, tripping over his own legs to miss a straight delivery from Stuart Broad that crashed into middle-stump. Head added 71 off just 72 deliveries alongside Labuschagne and shared another 121-run partnership with Cameron Green to negate England’s strong start.

Head raced to his half-century off just 53 deliveries and continued to pummel the English bowlers in a 130-run second session which saw Ollie Robinson leave the field due to injury, leaving the visitors a bowler short. Head eventually reached his second century of the series of 112 balls before falling off the very next delivery, handing Ollie Robinson a simple catch at mid-on.

Cameron Green played some delightful strokes following Head’s dismissal but eventually succumbed to the short ball trap put in place by England on 74, leaving Australia at 241 for six at stumps.