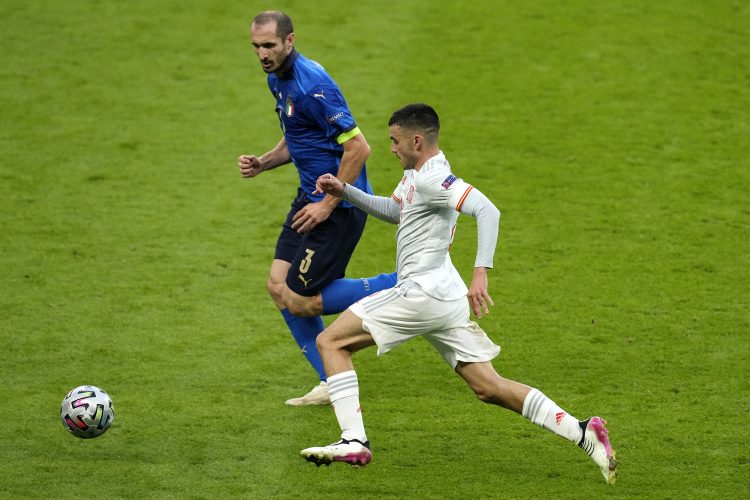 The 2020 European Championships have been one of the most entertaining major tournaments in recent history with plenty of drama and action throughout the 51 games. Teams such as Italy, Spain and England have dazzled throughout the summer, and there have been various exceptional performances from young talents across the continent.

Here are the top five young players at Euro 2020.

Dani Olmo has been one of the standout players in Luis Enrique’s Spain squad at Euro 2020, and the forward played a crucial role in La Roja’s run to the semi-final. Olmo changed the game for Spain in the last 16 against Croatia off the bench and assisted both goals in extra time to send them to the quarter-finals. The RB Leipzig attacker then followed that up with arguably one of the performances of the competition against Italy in the semi-final wherein he played as a false nine and caused massive problems for the Azzurri with his movement and assisted Alvaro Morata’s equalising goal.

Federico Chiesa wasn’t in Roberto Mancini’s starting XI in the group stages but the Juventus forward finished the competition as Italy’s most potent attacking threat and was even named in the UEFA Euro 2020 Team of the Tournament. Chiesa scored two incredibly important goals for Italy in the knockout stages – against Austria and Spain – and was the Azzurri’s most dangerous attacking threat in the final against England with his directness and trickery.

Mikkel Damsgaard was brought into the Denmark side as a replacement for Christian Eriksen and the Sampdoria attacker proved to be the perfect understudy, providing great energy and creativity to the Danish front-line. Damsgaard scored the opening goal in Denmark’s must-win encounter against Russia in the group stages with a rocket of a strike from outside the box and followed it up with the only direct free-kick goal of the tournament against England in the semi-final.

Italy’s shot-stopper Gianluigi Donnarumma played a massive role in their road to glory at Euro 2020 and is already one of the best goalkeepers in the world at age 22. The PSG goalkeeper made match-defining saves in both the quarter and semi-finals from Kevin de Bruyne and Dani Olmo and was the hero of the penalty shootout in the final with his two penalty saves off Jadon Sancho and Bukayo Saka that ended Italy’s 53-year wait for a European Championship title.

Pedri was the standout young player of the 2020 European Championships, and his astonishing rise has finally meant that Spain have found the true heir Xavi and Andres Iniesta’s throne. The 18-year-old starlet has been the conductor of Spain’s midfield orchestra and showed a level of maturity that is unheard of for someone of his age. Pedri completed every single one of his passes in the 90 minutes against Italy in the semi-final and finished the entire tournament with the most completed passes in the opposition half.