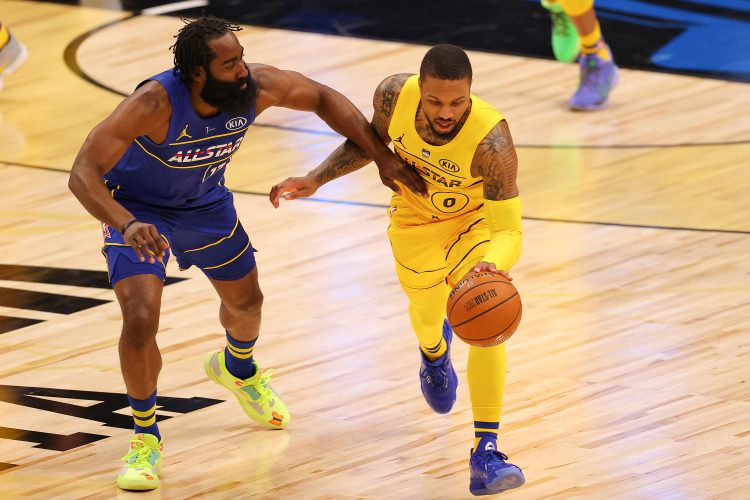 It was another dominating win for Team LeBron in the 2021 NBA All-Star Game as they beat Team Durant by a score of 170-150 at the State Farm Arena. It was an enthralling night in Atlanta that saw plenty of high-flying dunks and half-court shots as the best players around the league battled it out. The star of the night for Team LeBron was Giannis Antetokounmpo who went home with the Kobe Bryant MVP award. The two-time league MVP was virtually unstoppable for team LeBron as he scored 35 points without missing a single shot all night and also managed 7 rebounds and 3 assists.

Giannis was well assisted by Stephen Curry who had 28 points and 4 assists and Portland’s Damian Lillard who had 32 points. Both Curry and Lillard had 8 three-pointers on the night and were casually pulling up for shots from near the half-court line. Lillard even hit the game-winning shot for Team LeBron with a three-pointer from the logo. Phoenix Suns guard Chris Paul also created history by moving past Magic Johnson as the all-time assist’s leader in the All-Star game thanks to his 16 dimes on the night for team LeBron. Despite LeBron winning his fourth consecutive All-Star game as captain, the 17-time All-Star had a poor outing as he only managed four points in the game on 2-7 shooting.

The stars for Team Durant were Washington Wizard Guard Bradley Beal and Kyrie Irving from the Brooklyn Nets. Irving had 24 points and 12 assists while Beal managed 26 points in the game. Team Durant were badly missing their starter Joel Embiid who was ruled out on the morning of the game due to coming in contact with someone who tested positive for Covid-19 before flying out to Atlanta.

It was an action-packed spectacle in Atlanta where all the All-Star events were packed into one night. Stephen Curry was crowned champion of the 3-Point Contest for the second time in his career. He scored an impressive 31 points in the first round, before scoring 28 in the final round to edge out Utah’s Mike Conley who finished on 27. The Skills Challenge was won by Domantas Sabonis who beat Orlando’s Nikola Vucevic in the final while the Slam Dunk contest went to Anfernee Simons from the Portland Trailblazers who edged out New York’s Obi Toppin and Cassius Stanley from the Indiana Pacers.