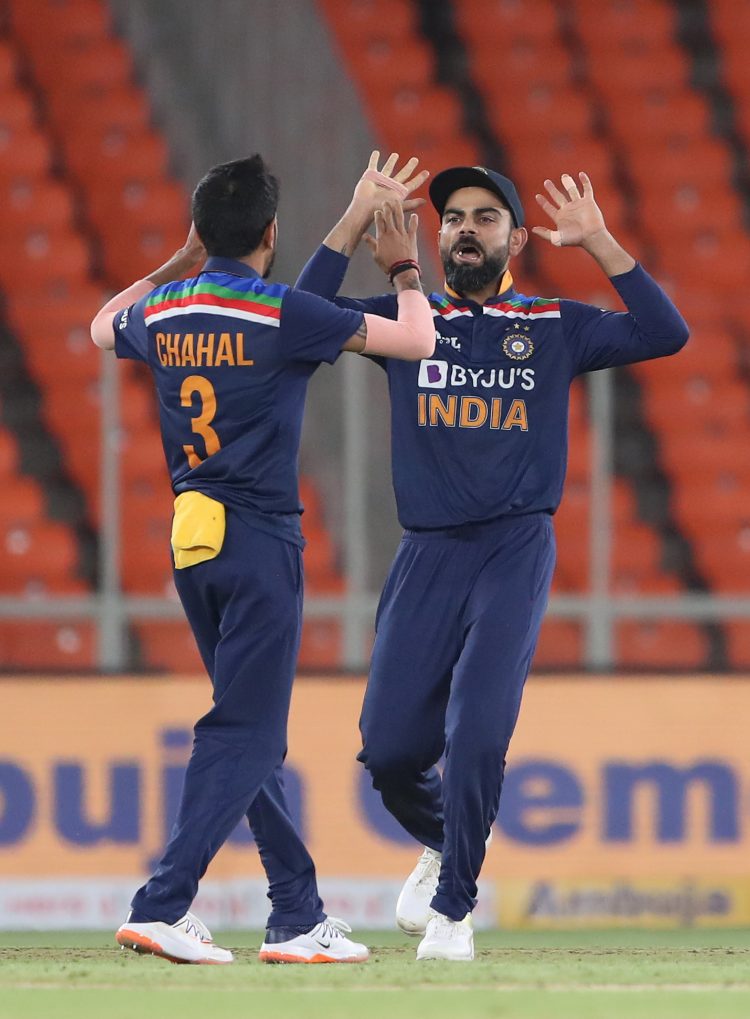 The Royal Challengers Bangalore have one foot in the playoffs after Virat Kohli’s side comfortably eased past the Rajasthan Royals to register their seventh win of the season. Following a brisk start from the RR openers, RCB pulled things back excellently thanks to tight spells from the spinners – Yuzvendra Chahal and Shahbaz Ahmed – and limited Rajasthan to a below-par total of 149. With the bat, Glenn Maxwell scored his second consecutive half-century for Bangalore as RCB chased down the target with nearly three overs to spare.

For the fourth consecutive game, RCB failed to pick up a wicket in the powerplay as Rajasthan got off to a flyer with the bat. The left-handed pair of Lewis and Jaiswal took 13 runs off Glenn Maxwell’s opening over before the West Indian took the attack to the debutant George Garton who erred on the shorter side. The Royals openers breezed past fifty within the first five overs and shared a brisk 77-run partnership before Jaiswal (31 off 22) was dismissed by Daniel Christian in the 9th over.

Lewis continued his onslaught as he reached fifty, but his dismissal to a slower-ball from George Garton prompted a historic collapse from Rajasthan in the back half of the innings. The Royals completely capitulated as they lost eight wickets for 49 runs in the last nine overs as the likes of Chahal, Shahbaz Ahmed and Harshal Patel ran circles around the Rajasthan batting line-up.

Shahbaz Ahmed had both Sanju Samson and Tewatia caught on the boundary in the same over, while Chahal removed the dangerous Liam Livingstone with his classic wide floated leg-spinner. Harshal Patel capped off the innings perfectly with three wickets off the final over with Rajasthan ending up with an underwhelming 149 on the board.

Earlier this year, Padikkal and Kohli shared a mesmerizing 181-run stand against Rajasthan, and the pair started the run-chase in the same vein as they took 26 runs off the first two overs from Chris Morris and Kartik Tyagi. Although both batters were dismissed on either side of the powerplay, RCB were always ahead of the run-rate with KS Bharat and Glenn Maxwell sharing a steady 69-run partnership. Bharat departed after a promising 44 off 35 balls, but Glenn Maxwell finished the match after smashing 22 runs off Chris Morris – who conceded 50 from his four overs.

This victory consolidates RCB’s position in 3rd place on the table with 14 points on the board, while Rajasthan are all but eliminated from the competition as they linger in 7th on the points table after suffering their 3rd consecutive defeat in the UAE.