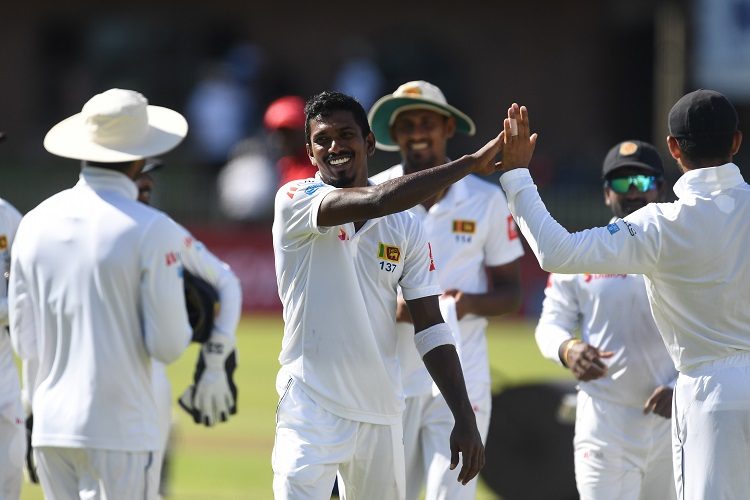 PORT ELIZABETH, SOUTH AFRICA - FEBRUARY 21: a view of Sri Lanka's walking off the field after bowling South Africa all out during day 1 of the 2nd Castle Lager Test match between South Africa and Sri Lanka at St George's Park on February 21, 2019 in Port Elizabeth, South Africa. (Photo by Ashley Vlotman/Gallo Images/Getty Images)

South Africa and Sri Lanka ended Day One of the second Test of the series, at St George’s Park, Port Elizabeth on equal footings. Thirteen wickets fell in the day, most of them to seam bowling of the highest order. After bowling out South Africa for 222, Sri Lanka are 60/3 at stumps, 162 in arrears.

Lahiru Thirimanne is still out there on a pitch that has offered both lateral movement and bounce. Having seen three wickets fall at the other end, he stayed put at the crease for an hour and a half for a gritty 25. With him is night-watchman Kasun Rajitha, who had bowled brilliantly in the second session.

With Thirimanne out there Kusal Perera, Niroshan Dickwella, and Dhananjaya de Silva to follow, Sri Lanka have a chance to nose ahead and post a lead if they see off the initial burst of pace.

But Dale Steyn, Kagiso Rabada, and Duanne Olivier have bowled with such hostility that it looks a serious challenge. If they bowl with the same intensity on the second day, the Sri Lankans will have their task cut out.

Vishwa Fernando struck in his third over (the sixth of the match) with a peach. The ball, delivered from the corner of the crease, jagged back in through Dean Elgar’s defence.

The next ball, pitched up further, hit the stumps to send Hashim Amla back. Amla is not in the greatest of form, but the ball would have got most in-form batsmen. It was the first golden duck of Amla’s Test career.

At the other end, Suranga Lakmal rapped Aiden Markram on the thigh. Then Markram pushed one to mid-on. Temba Bavuma, who had set off for a single, failed to beat Rajitha’s direct throw at the non-striker’s end.

Faf du Plessis looked uncomfortable towards the beginning of his innings before finding some rhythm towards the end of the first session. Markram batted confidently against the left-arm spin of Lasith Embuldeniya. The pair added 58.

Dimuth Karunaratne brought himself on in the last over before lunch. Du Plessis tried to drive penultimate ball before the interval; the ball took his edge and dribbled on to the stumps. It was the second wicket of Karunaratne’s Test career (the first was Cheteshwar Pujara). South Africa went to lunch at 73/4.

Quinton de Kock took the attack to the Sri Lankan camp, opening up in a flurry of strokes. Markram looked solid at the other end. The pair added 57, and just when it seemed South Africa would come back strongly, Rajitha ran through the middle-order with 3 wickets in 16 balls.

He got Markram (60) first, bringing one in to hit his pad. Markram went for the DRS but the decision stayed put. Debutant Wiaan Mulder hit Rajitha twice to the fence with exquisite cover drives, but Rajitha had the last laugh by trapping Mulder leg-before with an off-cutter.

At the other end Lakmal found de Kock’s edge, only for Kusal Mendis to grass the chance at first slip. De Kock was on 37; the drop turned out to be costly.

De Kock went on a rampage, but Rajitha bowled a beautifully pitched up delivery that held its line and took the edge to send Keshav Maharaj back.

Rabada was troubled by Lakmal and Rajitha but stayed put. Rabada got two lives on 8: de Silva first dropped him at slip off Rajitha; and Embuldeniya failed to hold on to a return catch. Worse, Embuldeniya injured his thumb in the process and had to leave. The injury will take six weeks to heal, and even if he bats here, he is unlikely to bowl.

Rabada helped de Kock put on 59 for the eighth wicket. De Kock (86 in 87 balls) finally missed one from de Silva while trying to hit through off and was bowled. He had pulled a hamstring before that and had to limp for his singles.

The South Africans hit back. Steyn and Rabada found movement with the new ball. Karunaratne and Thirimanne edged a few, but they fell safe. After beating the bat time and again, Rabada finally found the edge to send Karunaratne back.

Rabada tormented Oshada Fernando throughout the 14th over of the innings, bowling at great pace and beating the edge numerous times. The pressure got to Oshada, who chopped one to the stumps off Olivier at the other end.

Kusal Mendis looked at sea against Steyn and Olivier. At least two balls fell short of gully, one of them a ballooning one. Olivier finally had him caught behind.