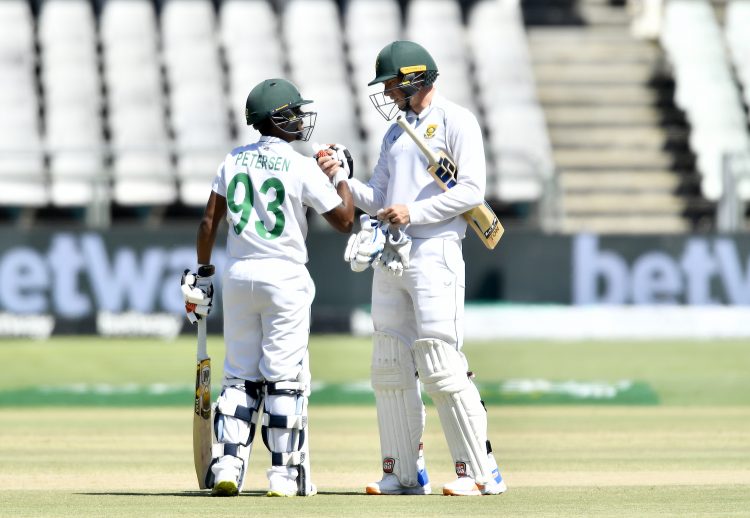 History repeated itself at Cape Town as South Africa produced another stunning fourth-innings run chase of over 200 against India to win the third Test by seven wickets, completing an extraordinary comeback to seal a 2-1 series victory. The Proteas’ middle-order once again made the telling contribution in the decider, with Keegan Petersen scoring 82 runs of the highest quality against a top-class Indian bowling attack to guide the hosts to victory on day four. The number three was well supported by Rassie van der Dussen (41) and Temba Bavuma (32) as the Proteas chased down 212 to deny Virat Kohli’s side the chance of becoming the first Indian team to win a Test series in South Africa.

South Africa entered the final day needing 111 runs to win with eight wickets hand, and in the end, Dean Elgar’s side cantered home on a tricky Newlands pitch to become only the fifth side in Test history to complete two successful 200-plus chases in a series.

India began the fourth morning with a spell of sustained pressure from Jasprit Bumrah and Mohammad Shami, with both bowlers going past the outside edge regularly. Unfortunately for the Men in Blue, they weren’t able to find the decisive nick as the Proteas slowly began to release the pressure by capitalising on any run-scoring opportunities. Keegan Petersen reached his third 50 in four innings with a leading-edge past gully and was handed a reprieve on 59 when Cheteshwar Pujara dropped a regulation chance at first slip after Jasprit Bumrah finally found the outside edge.

Petersen continued to frustrate India alongside Rassie van der Dussen with the pair finding the boundary with regularity to bring up a pivotal half-century stand. However, India finally caught a break with 59 runs still needed as Shardul Thakur once again proved to be the partnership-breaker, getting Keegan Petersen to chop one onto his stumps on 82 to give the tourists a sliver of hope. The Men in Blue built up more dot-ball pressure following that wicket, but Temba Bavuma quickly extinguished any chance of an Indian victory with two outstanding boundaries in a Jasprit Bumrah over before Lunch.

Virat Kohli introduced Ravichandran Ashwin after the break with 41 runs still to go, but Rassie van der Dussen greeted the off-spinner with a bludgeoned sweep shot before Temba Bavuma creamed a flurry of boundaries to help the hosts seal a famous series victory against the world’s number one ranked side.