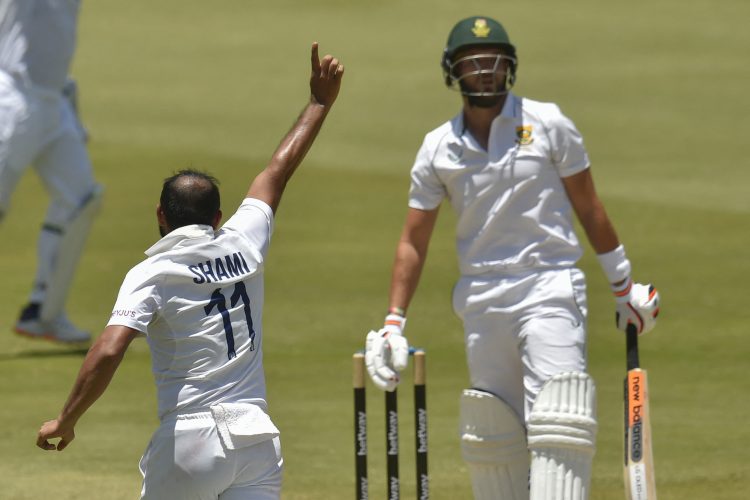 Following a complete wash-out on day two due to rain, India and South Africa made up for all the overs lost in an eventful day three at Centurion that saw a record 18 wickets fall. The visitors lost their final seven wickets for just 55 runs in the morning session before South Africa were rolled over for 197 in the second innings as Mohammad Shami picked up his sixth Test five-for to put India in a commanding position at stumps.

The Men in Blue resumed their innings on the third morning at 272 for three but were bowled out for only 327 after a lower-order collapse. The Centurion pitch offered plenty more assistance to the South African seamers compared to day one, and Lungi Ngidi made full use of the helpful conditions, finishing with figures of six for 71.

KL Rahul was the first man dismissed after adding only one run to his overnight score, gloving one down the leg side against Kagiso Rabada, while Ajinkya Rahane was undone by the extra bounce from Ngidi on 48. India’s lower-order offered very little resistance against the pace and movement of the South African seamers, with the Men in Blue losing five wickets in the space of 25 deliveries and finishing with a total of 327 after a brief cameo from Jasprit Bumrah.

In response, India hit back immediately with the ball as Jasprit Bumrah removed Dean Elgar in the first over of the innings with a delivery that angled away from the South African captain and took the edge. Aiden Markram and Keegan Petersen were fortunate to make it to Lunch unscathed, but the Indian pacers ripped through the South African top order after the interval with a hostile spell of fast bowling.

Mohammad Shami got Petersen to chop one onto his stumps in the first over of the session before sending back Aiden Markram with a peach that held its line and crashed into the top of off. Mohammed Siraj also got in on the action, enticing Rassie van der Dussen into a drive outside off-stump to reduce South Africa to 32 for four inside 13 overs.

Temba Bavuma and Quinton de Kock stitched together a crucial 72-run stand as the pitch eased out through the afternoon session, but Shardul Thakur broke the partnership for India on the stroke of Tea, getting the keeper-batsman to chop onto his stumps after an elegant 34.

After the break, Shami sent back Temba Bavuma and all-rounder Wiaan Mulder in quick succession before removing Kagiso Rabada to seal his five-wicket haul and reach his milestone 200th scalp in Test cricket. Jasprit Bumrah spent large parts of the day off the field after twisting ankle in the 12th over, but the pacer returned to wrap up the South African innings and give India a lead of 130.

The Indian openers were forced to survive half an hour with before stumps, and South Africa managed to prize one wicket before the end of play as Mayank Agarwal edged behind to Quinton de Kock off Marco Jansen.