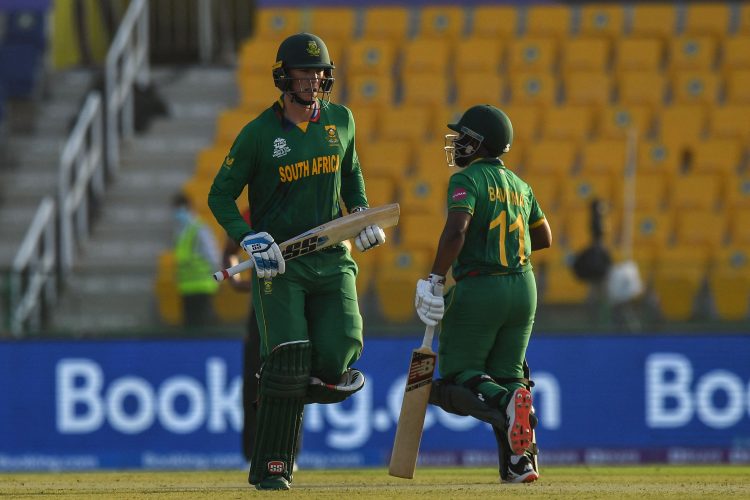 The South African seamers ran riot on a green top in Abu Dhabi with Kagiso Rabada and Anrich Nortje each registering their career-best figures to skittle Bangladesh for 84 all-out. The duo unsettled the Bangladeshi batters with their pace and bounce, picking up three wickets apiece before the Proteas comfortably chased down the target with 39 balls and 6 wickets to spare.

In a World Cup that has been characterized by slow, low, turning wickets, the pitch in Abu Dhabi was a pleasant surprise for the South Africans as it had plenty to offer for the seamers in terms of bounce, carry and movement. Kagiso Rabada was the first to capitalize on the conditions on offer, picking up three wickets in the powerplay. The Bangladeshi batting lineup was weakened by the absence of the injured Shakib al Hasan, and Rabada made further inroads, removing Mohammad Naim and Soumya Sarkar off consecutive deliveries before cramping Mushfiqur Rahim for room with a steep bouncer that flew to gully.

There was no respite for the Bangladeshi batters as Rabada was well complemented by Anrich Nortje, who removed the captain Mahmudullah with another well-directed bumper that ballooned to Aiden Markram at point. Afif Hossain followed soon after for a golden duck, and Bangladeshi’s troubles compounded at 45 for six with Shamsi trapping opener Liton Das LBW.

Mahedi Hasan offered some resistance as the only batter with a strike rate above 100, but Nortje returned to clean up the tail in the 18th over and finished with figures of 3 for 8 in his 3.2 overs.

Despite chasing only 85, South Africa faced a few hiccups of their own in the powerplay as seamers Taskin Ahmed and Shoriful Islam found similar purchase from the wicket. Taskin Ahmed removed Reeza Hendricks and Aidem Markram, while Quinton de Kock perished after hitting a couple of boundaries against Mahedi Hasan.

However, Rassie van der Dussen and Temba Bavuma eventually steadied the ship from 33 for three and guided the Proteas home before the 15th over to give a massive boost to their net run rate.

South Africa’s victory takes them to six points in Group 1 and lifts them to number two in the table above Australia. The Proteas’ fate now rests firmly in their own hands, and a win against England on Saturday will all but guarantee their passage into the final four thanks to their superior net run-rate. Bangladesh, on the other hand, remain winless in the Super 12 stage after four matches and have now been officially eliminated from the competition along with Sri Lanka.