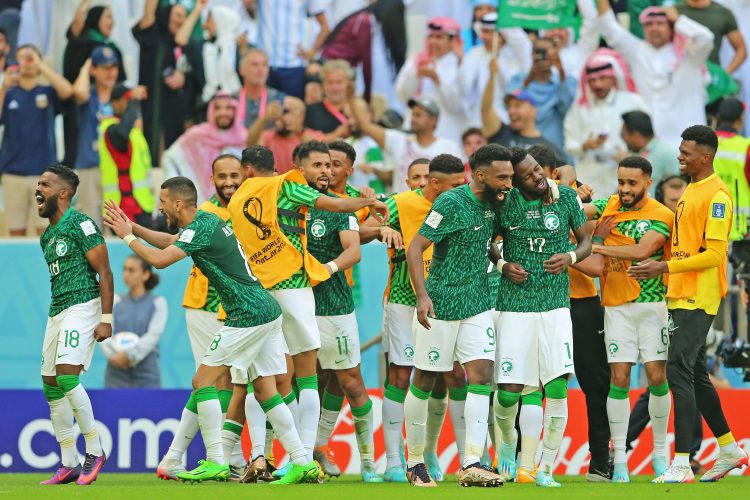 The 2022 FIFA World Cup had its first major shock as Saudi Arabia produced one of the biggest upsets in the history of the tournament to beat Argentina at the Lusail Stadium in Qatar. Lionel Messi opened the scoring for the Copa America champions from the penalty spot in the first period, but goals from Saleh Al-Shehri and Salem Al-Dawsari helped the Asian side complete an extraordinary second-half turnaround against one of the pre-tournament favourites.

Argentina entered the tournament on the back of an outlandish 36-game unbeaten run in all competitions, making this result against the 51st-ranked nation in the FIFA standings one of the most remarkable upsets at a World Cup.

There were no hints of a Saudi Arabia victory in the opening stages as Argentina stole the early initiative. Lionel Messi had an effort saved within the first two minutes before Argentina were gifted a penalty in the tenth minute following a VAR review.

Messi coolly converted the spot kick to score his 7th goal at the World Cup finals, wrong-footing the goalkeeper with a simple finish. Argentina dominated the proceedings following their opener but were continuously caught off-guard by the high line employed by the Saudi Arabian defence.

The South American side had the ball in the back of the net on three more occasions in the first period, only for each of them to be ruled out for off-side. Messi was found guilty of wandering into an off-side position on a counter, while Lautaro Martinez timed his run incorrectly on two occasions.

These mistakes eventually came back to haunt Argentina as Saudi Arabia found an equaliser just moments into the second half. Saleh Al-Shehri capitalised on some hesitancy from centre-back Cristian Romero and beat goalkeeper Emiliano Martinez with his strike into the bottom corner. Al-Shehri’s goal swung the momentum in Saudi Arabia’s favour, and Salem Al-Dawsari flipped the script five minutes later with another unstoppable strike. The winger cut inside onto his right foot before rifling a curled effort into the top corner to put the Saudis in front against all odds.

Lionel Scaloni threw on Julian Alvarez, Marcos Acuna, Enzo Fernandez, and Lisandro Martinez in the search for an equaliser, but Saudi Arabia defended valiantly in the final half-hour to snatch the three points. Goalkeeper Al-Owais made a couple of incredible saves from close range to deny Lisandro Martinez and Lionel Messi, while the defence threw their bodies on the line to see out the game and complete their miracle win.

This defeat leaves Argentina in grave danger of crashing out of the World Cup in the group stage, and the Copa America winners will have to find a positive result against Mexico on Saturday to stay alive in Group C.