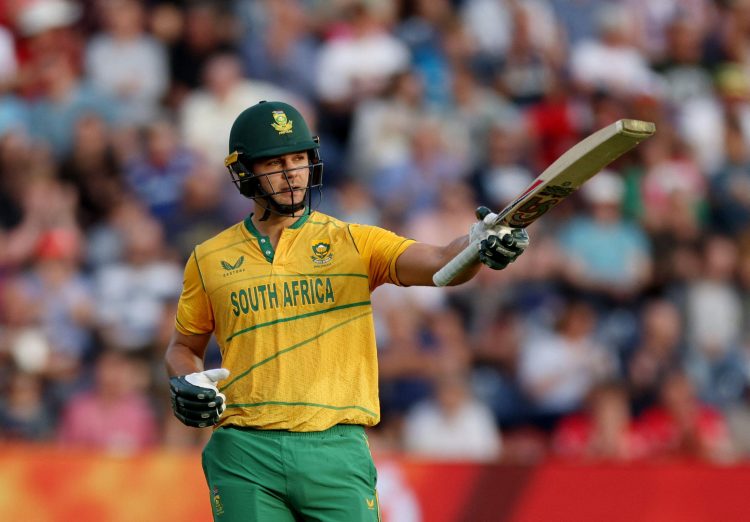 Following their heavy defeat in Bristol, South Africa levelled up the scores at 1-1 in the series with a comprehensive 58-run win in the second T20I at Cardiff. Rilee Roussow marked his return to the South Africa set-up with a brilliant 96* off 55 deliveries to take the Proteas to 207 for 3 before England were bundled out for 149 in the chase to set up the series decider in Southampton on Sunday.

After a disappointing performance from the top-order in the opening T20I, the Proteas made amends at the Sophia Gardens with 58 runs coming in the powerplay after England put the visitors in to bat. Quinton de Kock departed early as he picked out Jason Roy at mid-on, but Reeza Hendricks notched his second 50 in two games before Rilee Roussow took over throughout the rest of the innings.

Roussow started cautiously, scoring just six runs of his first ten deliveries before finally picking up the pace. The left-hander targeted the short straight boundaries in Cardiff, pummelling Adil Rashid and Chris Jordan down the ground to take the Proteas to 100 for one at the halfway mark. Roussow continued his charge after Hendricks departed on 52 as he brought up his first T20I half-century in six years for South Africa.

The 32-year-old slapped Richard Gleeson for three boundaries in the 16th over and punished Chris Jordan for missing his yorkers with a couple of meaty blows down the ground. The veteran English pacer finally found his radar in the final over of the innings, conceding just four runs in the 20th to leave Roussow unbeaten on 96, four runs short of his maiden T20I century.

Chasing 208, Jos Buttler came out swinging for the fences in the powerplay. The English skipper pulled Kagiso Rabada into the grandstand before smashing the first three balls of Andile Phehlukwayo’s spell to the boundary. Unfortunately for England, the South African all-rounder had the last laugh as he corrected his line, causing Buttler to top-edge one to Reeza Hendricks on the leg-side one ball later.

England continued to lose wickets after the initial onslaught, with the South African spinners striking at regular intervals to dent the hosts’ chances. Dawid Malan skied Keshav Maharaj in the final over of the powerplay before Tabraiz Shamsi picked up three wickets in the span of two overs. Jason Roy was the first victim, mistiming his heave to long-off following a frustrating innings of 20 from 22 before left-handers Moeen Ali and Sam Curran picked out Keshav Maharaj down the ground.

Jonny Bairstow and Liam Livingstone briefly kept England interested with a 36-run stand, but after the pair were dismissed in consecutive overs, South Africa quickly wrapped up the innings to secure an emphatic 58-run win.