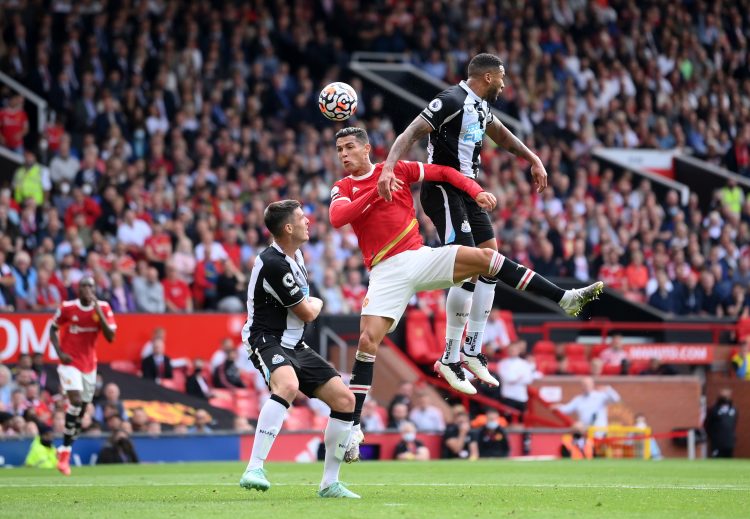 There was an air of inevitability that surrounded Old Trafford as Cristiano Ronaldo enjoyed the perfect homecoming in his first start for Manchester United since his summer move from Juventus. The Portuguese superstar scored twice on his second debut for the club as Manchester United trounced Newcastle United 4-1 to go to the top of the Premier League table. Ronaldo opened the scoring in first-half stoppage time with a poacher’s finish before doubling his tally in the 62nd to help United retake the lead.

Ronaldo’s return has added a feel-good factor back to Manchester United, and the atmosphere was euphoric in the build-up to kick off with Ronaldo selected in the starting XI along with Raphael Varane and Jadon Sancho for their full home debut.

Ronaldo played as the centre-forward alongside Mason Greenwood and Jadon Sancho, but the 36-year-old was afforded the freedom to roam wide by Ole Gunnar Solskjaer as he looked to get more involved in the play. Steve Bruce lined up his Newcastle side in a 5-4-1, and the Magpies did well to limit the Red Devils in the opening exchanges. United looked laboured on the ball as they struggled to create many chances in the first half as Ronaldo dusted off some rust with few speculative efforts that failed to test the goalkeeper.

Nevertheless, the breakthrough eventually came in the closing stages of the half after Newcastle goalkeeper Freddie Woodman spilled a long-range effort from Mason Greenwood straight to the feet of Ronaldo, who scored his first goal in 12 years for the club with a simple finish into the empty net.

The party at Old Trafford was short-lived, however, as Newcastle equalised in the second half after Miguel Almiron cut through the United defence before releasing wing-back Javier Manquillo who lashed the ball into the bottom corner.

The response from United though, was even better as Luke Shaw drifted into midfield before releasing Cristiano Ronaldo down the left who lashed his shot straight through the legs of a disconsolate Freddie Woodman in goal to send Old Trafford into delirium. United dominated the game from that point on as Bruno Fernandes sealed the victory with a stunning strike from long-range before Paul Pogba bagged his 7th assist in four games to start the season as he set up Jesse Lingard in stoppage time to cap off an excellent victory.

While United’s clinical performance lifts them to the top of the league with 10 points, Newcastle United drop into the relegation zone after four games, with Steve Bruce’s side only picking up one point so far this season.