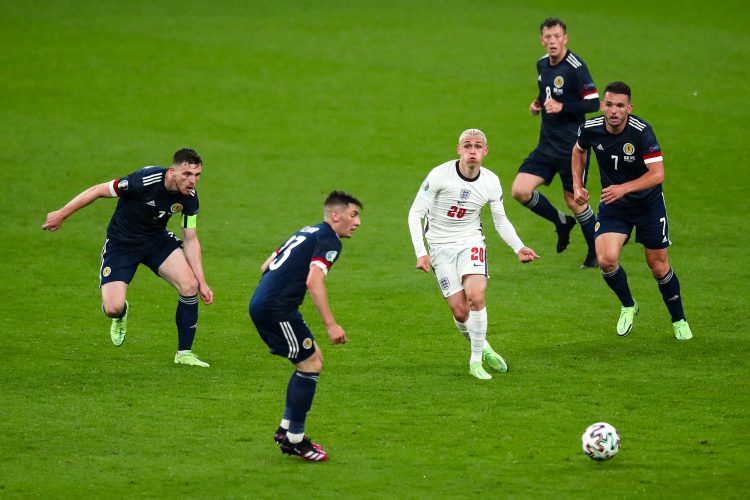 It was a frustrating night for England at Wembley as they were held to a 0-0 draw by Scotland at a rain- soaked Wembley. While the Three Lions got a crucial point that almost guarantees their qualification, there was a lot to be desired about their performance as a spirited Scotland were the more impressive side across the 90 minutes.

Just like against Croatia, England started the game brightly and should have taken the lead after John Stones headed Mason Mount’s corner straight onto the crossbar in the 11th minute.

However, as the heavens opened, it was Scotland who grew into the ascendency, creating plenty of chances of their own. Manager Steve Clarke made four changes to the side that lost 2-0 to the Czech Republic and it was the introduction of Che Adams, Kieran Tierney and Billy Gilmour that provided the spark for Scotland. Adams had a couple of chances to open the scoring in the first half while Tierney created Scotland’s best chance of the match, crossing the ball to Stephen O’Donnell who forced a sharp
save from Jordan Pickford diving to his right.

Scotland overpowered England in the middle of the park and were able to win the midfield battle thanks to an outstanding performance from 20-year-old Billy Gilmour. The Chelsea midfielder showed his class on his first Scotland start and controlled the tempo of the game while also displaying tenacity without the ball in an all-action performance.

England had more of the ball in the second period, but Scotland were incredibly compact in their 5-3-2 system and looked dangerous every time they ventured forward, with Reece James making a crucial intervention on the goal-line to block Lyndon Dyke’s shot.

The hosts failed to fashion many chances in the second period, despite the introduction of Jack Grealish on the hour mark. The biggest disappointment for Gareth Southgate was the anonymous performance of his captain and talisman, Harry Kane. The Tottenham striker was completely neutralised throughout the match by Scottish centre back Grant Hanley and looked worryingly sluggish and off the pace. Despite England needing a goal in the final stages, Kane was replaced by Marcus Rashford 15 minutes from full- time after only 19 touches and seven completed passes throughout the game.

Despite this stale-mate, England take their tally to 4 points in Group D and have almost guaranteed their qualification to the round of 16. Scotland, on the other hand, kept their hopes in the tournament alive with this draw and will have to win their final game against Croatia at Hampden Park in Glasgow to progress through to the knockout stages.