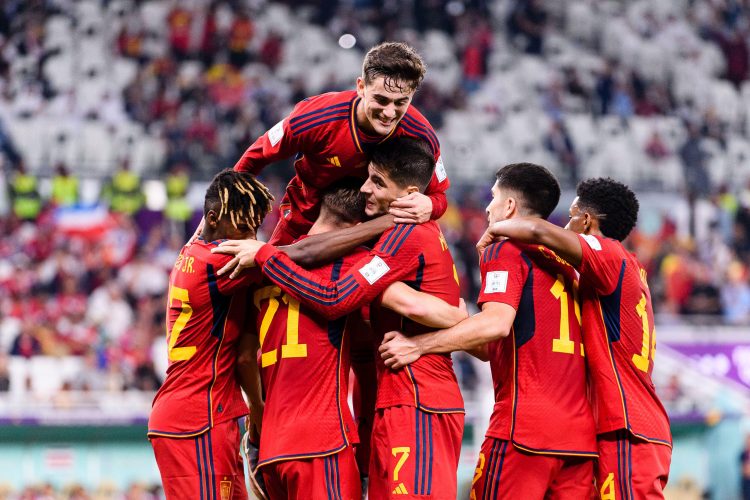 Spain enjoyed the perfect start to their 2022 FIFA World Cup campaign as Luis Enrique’s side put Costa Rica to the sword with an astonishing 7-0 victory at the Al Thumama stadium on Wednesday. Goals from Dani Olmo, Marco Asensio, Gavi, Ferran Torres, Carlos Soler, and Alvaro Morata helped La Roja kick off their journey in style and register their nation’s biggest ever victory at a FIFA World Cup.

It was a completely dominant performance from the 2010 winners in Qatar as Costa Rica struggled to land a single punch across the 90 minutes, managing just 18% possession and failing to register any shots on target in the encounter. Six different Spanish players found the back of the net for Luis Enrique’s side, and Dani Olmo started the scoring spree in the tenth minute with an excellent piece of control and a chipped finish over goalkeeper Keylor Navas.

Ten minutes later, Marco Asensio doubled the tally for La Roja, expertly redirecting Jordi Alba’s cross into the far post. Costa Rica failed to string together any passes to hurt the Spanish defence, and their troubles were exacerbated at the half-hour mark when Jordi Alba was bundled down in the area to give Spain a penalty.

Ferran Torres stepped up and converted the spot kick by sending Navas the wrong way, and the Barcelona forward added a second nine minutes after half-time. The 22-year-old capitalised on some miscommunication between the goalkeeper and Bryan Oviedo to give the European giants a 4-0 advantage.

Luis Enrique brought on Alvaro Morata and Carlos Soler following the fourth goal with the game already put to bed, and the two substitutes were influential in maintaining Spain’s attacking threat in the final half hour. Morata set up the fifth goal with a cross to the edge of the area for Gavi, who struck a sweetly timed volley with the outside of his boot to become the third-youngest scorer in World Cup history.

Carlos Soler added a sixth after Keylor Navas spilt a Nico Williams cross into the area. Morata made it seven just a few moments later, exchanging a one-two with Dani Olmo before rifling the ball into the bottom corner to rub salt into Costa Rican wounds.

Spain’s performance was a big warning sign to the rest of the contenders of their quality at this World Cup, and Luis Enrique’s side will have a chance to make another statement on Sunday when they face Germany at the Al Bayt stadium in Doha.